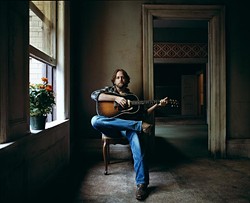 Hayes Carll can be described in many ways. But those are all descriptions that he sings on his most recent album KMAG YOYO.

That’s the kind of guy Carll is: self-deprecating, fun loving, poetic and thoughtful. All are apt descriptions but the latter is most apparent in his songwriting. Carll thinks. He also writes these thoughts out and plays music to them. But not just any music, pensive country music that is a thorough examination of basic American life, which is why Carll fits soundly in the Americana genre. And it’s also why he is a critically acclaimed songwriter. (American Songwriter’s No. 1 song of 2011, KMAG YOYO was the Americana Music Association’s No. 1 album).

He makes music that is so visceral one might think he is singing about them, or to them. It almost seems simple — like anyone can do it. Though many might try, few can do it as well as Carll does.

"It's always a challenge trying to articulate a feeling or a story, or convey what's going on in a certain relationship," Carll said. "It's all life and you take in what you're living and what is important to you and that changes over time. There was a time where writing about how quick life went by was really interesting to me, or a lot of times writing about getting drunk was interesting to me. Or using that as a backdrop for stories I was telling. It's all life and it all comes together, and sometimes certain things are more on your mind than others when you're writing."

Country star Le Ann Womack recently covered Carll’s song “Chances Are,” a song so saturated with desire and despair that anyone can relate to it. Womack does the song beautifully, but her rendition lacks that road-worn voice of Carll that makes the song so engaging. Womack gets it, but she can’t do it. Not like Carll.

“She's just one of those premiere voices in country music,” he said. "And I was just really interested to hear a female take on [the song]. It really blew me away."

After 15 years of touring, meeting every type of person one can imagine, and usually writing a song about them, Carll is an accessible dude. He is so relatable because he is so thoughtful. It is an absurd cycle that repeats ad infinitum.

Check out Carll with his buddy, band mate and Oklahoma native Travis Linville, this tomorrow night in Norman. The two have been playing together for more than 10 years, ever since Carll caught Linville’s set at the Wormy Dog Saloon. Linville is a guitar maestro that can tell a story with his machine as well as Carll can write one. Together the two are an irrepressible force.

But Linville is also a hell of a songwriter with an album and a handful of E.P.s to his name.

“He's just an incredibly talented guy who can play everything,” Carll said. "He's super tasteful and a pretty remarkable songwriter. He just adds that much more to the show."

Linnville will open for Carll before joining him on stage as part of the band. The show is at 8 p.m. Friday at Sooner Theatre.