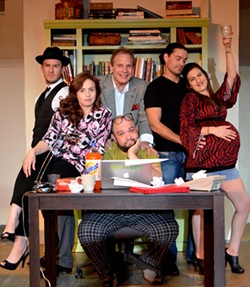 Rhonda Clark and the other minds behind Carpenter Square Theatre’s creative direction read all of playwright Nicky Silver’s new works. Finding one that’s a good fit for their intimate production setting is another matter.

Traditionally, Carpenter Square presents an offbeat comedy each summer, ending its season on a high note.

The Agony, Clark said, is exactly that kind of production.

“This one definitely fits that [description] because the characters often turn out of the scene and address the audience directly,” she said.

Characters break the fourth wall to clue the audience in on how they feel or what they have been through.

The Agony is partially based on the writer’s own experiences, and many of its characters reflect real-life struggles many starving artists face.

“They’re all kind of desperate in some way for work or money; they’re really a collection of losers,” she said. “They’re all down on their luck one way or another.”

Clark said while she often loves the premise of a story Silver sets up, his endings can leave her cold. Agony’s ending, however, feels truly satisfying.

Deep thought is not necessary to appreciate the show.

Instead, Clark advises theatergoers to sit back and enjoy the tale.

“It’s the same thing in the movies — they have their big blockbusters,” she said. “It’s more of a popcorn kind of story, and this definitely fits that.”

The Agony’s title is a spoof of the 1965 Charlton Heston-led film (and preceding novel) The Agony and the Ecstasy.

However, Richard is gay, and their relationship is a marriage of convenience. Sharing a New York City apartment causes its own problems.

“On one level, they lead separate lives, but when it comes down to it, they support each other,” Clark said. “It’s an unusual relationship.”

Richard attends every support group he possibly can, at least until they figure out he doesn’t have the problems he claims.

Clark said the lead character is neurotic and has lived as a virtual hermit for several years as he struggled to write.

“We all have someone in our lives who makes every little thing major,” Clark explained.

Richard thinks his luck has finally changed after he completes the first act of a new play.

The theater welcomes many new names with this show. Haque stars in his Carpenter Square debut.

Director Ronn Burton grabs the reins for the first time in the venue.

Clark said all of the show’s actors are new to Carpenter Square with the exception of Lanning and Rogers.

“We love having new energy and different actors for the shows because we do eight shows a year,” she said. “We love it when actors return, but then when we’ve got new faces, it’s great also.”

One of the characters in the play Richard is writing, the ghost of notorious real-life murderer Nathan Leopold, seemingly comes to life as a figment of the playwright’s imagination.

Leopold’s ghost is played by Alex Prather. Clark said the character’s energy is a stark contrast from the play’s other characters.

“What makes him funny is how dry and dead serious he’s playing the character,” she said. “Some of the other characters are just wild. They’re falling over sofas, they’re jumping on furniture in frustration, they’re leaping over things and then you’ve got this guy who is very serious, like a high-class wealthy smug from the ’20s.”

Leopold’s mannerisms are not the only things that separate the character from the others.

Audience members will be able to spot the mobster right away.

“We’ve got ripped and torn jeans, we’ve got cutoffs, but then we have [Leopold],” she said. “It’s a very period look. We’ve got a pocket watch and a chain and the fedora.”

The Agony closes out Carpenter Square to the public for a month, but Clark said those in the theater get no break.

Instead, the company will be preparing and rehearsing for the start of its next season, which begins Sept. 2.

The artistic director said those accustomed to the city’s bigger venues will find Carpenter Square’s cozy theater is a refreshing change of pace.

The Agony, with its confined settings, is especially appropriate for the space.

“We’re a real intimate theater,” Clark said. “We have just 90 seats, so you’re going to feel like you’re almost in the New York City apartment in the Upper West Side with the actors.”

The Agony & The Agony