“Without spoiling anything, I’ll just say that the characters are acting crazy, but they’re dealing with a death and a cancer diagnosis and resultant decision about whether or not to pursue treatment,” Clark said. 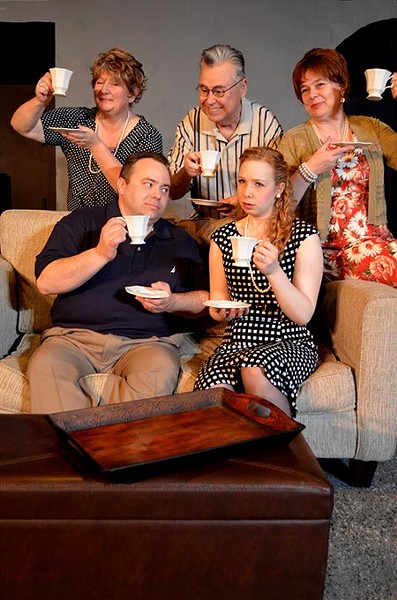 Carpenter Square Theatre has done something bold and possibly educational for the more millennial among us.

It’s staging a play set in modern times, yet before the proliferation of cell phones and the Internet — the early 1990s.

“There’s a landline phone in the kitchen that one aunt uses to run her crazy phone sex business, which she fell into by happenstance and which she describes as improving the lives of elderly men,” said Rhonda Clark, Carpenter Square artistic director.

37 Postcards, a play by Michael McKeever, is a character-driven comedy with a heart.

Its characters are, beneath their eccentricities, trying to sort out tough situations life has thrown their way. It runs through March 12 at the troupe’s 90-seat theater, 800 W. Main St., in downtown Oklahoma City.

The production centers on an affluent, kooky family, the Suttons, and the return of one of its members, Avery, who brings his fiancée with him to the family’s Connecticut compound.

“Without spoiling anything, I’ll just say that the characters are acting crazy, but they’re dealing with a death and a cancer diagnosis and resultant decision about whether or not to pursue treatment,” Clark said.

Described as taking place in a well-appointed madhouse, Clark said what spoke to her about producing the play is the pathos and that the audience gradually begins to understand what makes the characters tick as the play progresses.

“We know that Oklahomans love a good comedy,” Clark said. “And we produce eight shows each season, which gives us the latitude to offer a variety of genres.”

She wanted to be clear that this particular play is PG-13. There are no F-bombs, but the grandmother does call that phone-sex aunt a whore and a slut.

Clark has been Carpenter Square Theatre’s artistic director since 1999 and was a cast member in its first season in 1985.

She’s committed to community theater and wants to make sure people know it’s not at all lofty or intimidating.

“Local theater is casual, open and welcoming,” she said. “You don’t have to dress up; you can come as you are. There is nothing stuffy about it at all.”

Carpenter Square’s performance space is intimate, which makes for a great audience experience, but also means it’s not a bad idea to reserve your tickets ahead of time.

“It is a small house,” Clark said. “So while you can often walk up and buy tickets, we suggest making a reservation, even if it’s just a couple of hours before the performance, to make sure you get a seat.”

37 Postcards is made possible in part by Oklahoma Arts Council, National Endowment for the Arts and Allied Arts.