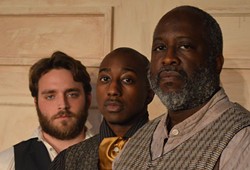 Before the end of the American Civil War, some slave owners did not feel comfortable whipping their slaves. So they hired men to do it for them. They are the namesake of Carpenter Square Theatre’s newest production The Whipping Man. The show runs through April 22 at the theater, 806 W. Main St.

“The way it’s described in the play is that these would have to be pretty sadistic people,” said Linda McDonald, the play’s director. “They would have all kinds of bullwhips on the wall, and they would choose what handles to use. There’s some stuff in there that makes your blood curdle a little bit.”

There’s no need to worry about scenes of graphic violence in The Whipping Man, a story by playwright Matthew Lopez. The gruesome details are discussed but not shown.

The Whipping Man is set in the immediate aftermath of the Civil War, just one week after the Confederacy surrendered at Richmond, Virginia’s Appomattox Court House. The city is in virtual ruin as young Confederate soldiers like Caleb (portrayed by actor Justice Wickstrom) return home to what’s left. When badly wounded Caleb arrives at his estate, he finds two of the family’s former slaves, older Simon (Michael Page) and younger John (Thonie Lee) waiting on the return of Caleb and the rest of his family.

Caleb’s family is Jewish, and events in Whipping Man feature the observance of Passover, the religious holiday that commemorates the traditional freeing of Jewish slaves from Egyptian rule. Parallels are drawn between the histories of the two liberated peoples, and Caleb reflects with the two former slaves, their shared past and new reality.

McDonald said she agreed to direct Whipping Man because the powerful script reeled her in. She has long held a fascination with Civil War history and has traveled to several former battle sites.

Part of the joy of directing the play is that the three-character production features some intensive character study. Page is an established actor locally, but Wickstrom and Lee are younger and McDonald said they are still learning about the stamina it takes to support a show for more than 90 minutes with little break.

“They really have just thrown themselves into the work, and it’s been a great experience working with them,” she said.

“She’s had to order some of [the uniform parts] from military supply places,” McDonald said. “Breast buttons, the hat, the boots — all of that has taken some time for her to get together, and she’s done a great job.”

There are plenty of presentations in film and on stage of the Civil War itself or the years that followed, but few productions take audiences into the conflict’s immediate aftermath.

McDonald said one of the most interesting takeaways from Whipping Man is that no one is purely innocent or purely wrong. Everyone is a complex person facing their own unique challenges.

“It’s not just a world that’s in upheaval, but it’s also three characters that are in upheaval,” she said. “It’s really interesting to track.”