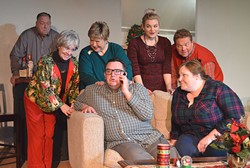 The holidays force most of us to confront an inevitable reality: family.

Whether you love them or would rather leave some out in the cold, Carpenter Square Theatre’s production of A Nice Family Christmas presents one family that just might be worse than our own. Artistic director Rhonda Clark spoke to Oklahoma Gazette about the play’s Oklahoma City premiere and unpredictable gatherings.

“Take the show Everybody Loves Raymond and set it in Lutheran Minnesota, and that’s A Nice Family Christmas,” Clark said. “It’s a comedy with a sitcom feel, where every character is larger than life.”

“Each character brings in elements from their personal life that they are trying to conceal,” Clark said. “Everyone’s truth is gradually revealed as the evening goes on, leading to drama and hilarity.”

A Nice Family Christmas offers a larger study of family dynamics during the holidays. Helen’s son Clark, a journalist for a struggling newspaper, has been assigned the task of writing a piece about his boisterous family. Of course, Clark’s plan doesn’t stay secret for very long.

“Once the family finds out he’s documenting them for a story, everyone goes into a tailspin,” Clark said.

A divisive narrative is exacerbated by the play’s unpredictable characters — most of whom weren’t even invited to the party.

“The crusty, inappropriate Grandma Lundeen unexpectedly shows up at Helen’s door, saying what she thinks and doing what she feels,” Clark said. “Uncle Bob loves to drink a little too much, despite the family’s Lutheran background. It’s a family of contradictions and tension just like anyone’s, but much more pronounced than most.”

Congruent with Carpenter Square’s goal to present audiences with contemporary stories with timely messages, A Nice Family Christmas also delves into generational issues. Stacey, a younger character, comes out to Grandma, who is less than accustomed to progressive social realities.

“We chose this play because it deals with intergenerational issues that audiences would find relatable,” Clark said. “Cast members are from their 20s to their 60s. Olsen writes most of his plays based on his own family experiences, and those always turn out to be such universally appealing stories.”

The play embraces the collective phenomenon of looking at your family and wondering how you got stuck with it.

“Sheryl Martin is directing Carpenter Square’s version of the play, and she’s especially good with comedy for the stage,” Clark said. “She’s done excellent work producing a play that engages all ages.”

Although it’s a play about familial dysfunction, the tone never turns morose. Clark said A Nice Family Christmas delivers an authentic look at the holiday experience.

“Each holiday season, we like to do a show with a Christmas theme but also keep it untraditional,” Clark said. “We want to keep people on their toes and show them what they don’t expect but ultimately what they relate to. … The play might remind you of some crazy extended relatives, but you’ll most likely leave grateful for your own family.”

Print headline: Fickle traditions, A Nice Family Christmas presents audiences with a family even more dysfunctional than their own.