“This story spans across one weekend inside the home of Vanya, Sonia and Masha’s deceased parents,” Clark said. “Coming together in a single space brings out the siblings’ collective angst, disappointments and resentments. It sounds like a drama, but it’s also hilarious.”

Set in present-day Bucks County, Pennsylvania, Durang’s play pokes fun at high-intensity sibling rivalries that have had more than enough time to simmer.

“All three siblings are well into their 50s, but their age certainly doesn’t indicate their maturity,” Clark said.

Vanya (a gay man) and Sonya (the adopted sister) take residence in their theater-enthusiast parents’ home, serving as caregivers until their parents’ demise. Masha, on the other hand, is a glamorous movie star, but she’s aging. 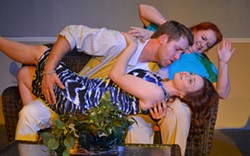 “The stress between them comes from the fact that Masha is now financially supporting Vanya and Sonya,” said Clark. “Naturally, all three exchange some bitterness.”

Interpersonal issues and sibling dynamics would never be complete without the help of individuals exterior to the family. Clark said to expect some colorful characters. The derisive character with a “heart of gold” truism has never resonated truer than in Durang’s story. If you don’t vibe with one of the play’s characters, chances are at least one will steal your favor. Clark said dialogue-heavy performances provide the ideal balance between comedic and thoughtful.

“Each character gets to shine through phenomenal monologues,” she said.

Not a classic literature buff or theater expert? Clark said that’s not a requirement to get a kick out of the play.

“You really don’t have to understand Chekhov’s work to enjoy the show,” she said. “It’s a story that can stand on its own.”

The underlying bond between these three unique siblings grounds this rollercoaster play of ups and downs.

“We’re incredibly excited to stage this play not only because of its recent awards and positive audience reception, but also because it’s an incredibly relatable story,” Clark said. “It’s an optimistic message about families, no matter how disconnected they’ve become.”

Vanya and Sonia and Masha and Spike