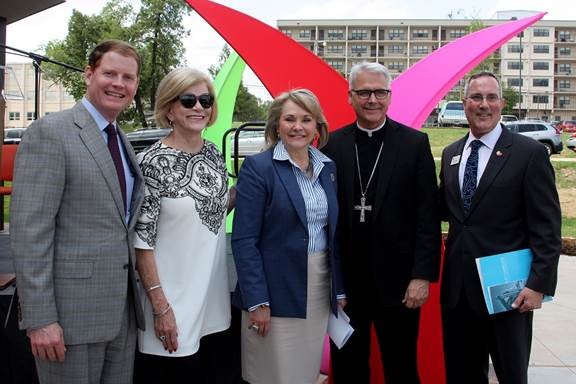 It’s not unusual for people to call Catholic Charities Archdiocese of Oklahoma City to say, “There’s a drunk passed out on your bench out front.”

A life-sized, realistic bronze cast of a homeless man lying huddled under a blanket on a park bench sits on the Classen Boulevard side of Catholic Charities’ new facility, which opened May 3.

The piece is Homeless Jesus by Canadian sculptor Timothy Schmalz.

While many organizations install statues of great people striking heroic poses, Catholic Charities instead chose this humble depiction of Jesus Christ as a symbol of its mission to treat all people in need as though they are Jesus.

“He is a silent call to what we do and a tie back into Mother Teresa, who said that Jesus is present in the distressing face of the poor,” said Sonny Wilkinson, senior director of mission advancement for the archdiocese in Oklahoma City. “So this is that silent witness to us that this is who we serve every day.”

The new structure at 1232 N. Classen Blvd. is the OKC organization’s fifth home. The local branch was founded in 1912, and the first one built specifically for Catholic Charities. It incorporates many features informed by those years of experience.

The building is the culmination of planning and a 10-month campaign led by Judy Love and Bob Ross, both local civic leaders. The campaign raised $10.5 million. Individual contributions ranged from $1 to $1.5 million.

The 33,860-square-foot building has a large, colorful, comfortable lobby for those waiting to see caseworkers.

The rest of the first floor is devoted to services for those who seek various types of help. About 65 staff members run family counseling, adoption and pregnancy services, refugee resettlement, immigration legal services and disaster relief programs.

Wilkinson said the legal assistance to immigrants program is the least understood of Catholic Charities’ services.

“We have attorneys and staff that help immigrants interface with immigration law,” he said. “We don’t determine their status. We don’t advocate their status. We say, ‘You need to come out of the shadows because there are benefits that you are eligible for,’ tie them into the court system, help them go through that process. And it ends in everything from deportation to getting their citizenship on the other end.”

The structure’s second floor features a chapel, a conference center, a staff break room and a veranda available for conference attendees.

It also includes administrative offices and a large room that can be fitted for short-term needs such as disaster relief coordination.

Disaster relief was not always a part of Catholic Charities’ portfolio. When 1995 bombing of the Alfred P. Murrah Federal Building occurred, the group developed its response as the situation unfolded.

And multiple years of devastating tornadoes have given the organization even more experience.

“We have continued to develop a more and more effective response,” Wilkinson said. “People come in from all across the country to find out what we have learned about disaster relief.”

Catholic Charities helped about 18,000 Oklahomans last year, 90 percent of which were not Catholic, leaders said.