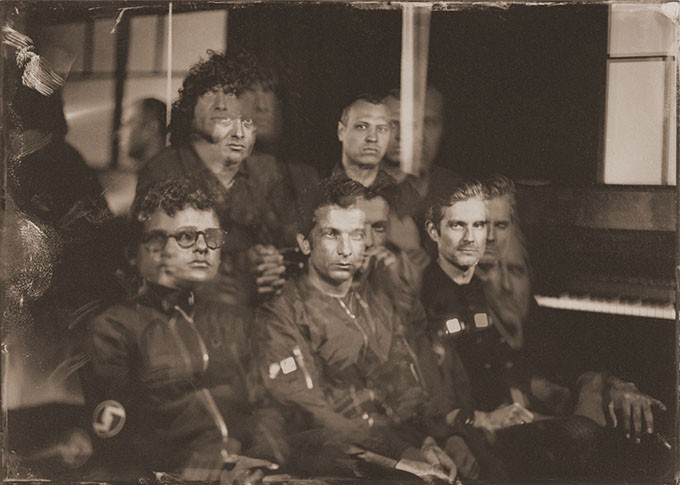 Like many people who came across the disturbing headlines alleging abuse by former Oklahoma City Police Department officer Daniel Holtzclaw, Cedric Bixler-Zavala was aghast. Holtzclaw, a white officer, was convicted in 2015 on multiple counts of rape and sexual battery of 13 black women while he was on patrol. Last year, he was sentenced to 263 years in prison.

The charges were ugly and disturbing, but there were other reasons the Grammy Award-winning progressive-rock and punk frontman and lyricist could not stop thinking about the case. Holtzclaw’s name also grabbed his imagination.

“The name just stuck out like a sore thumb,” Bixler-Zavala said during a recent Oklahoma Gazette interview. “He might as well have been named Dr. Doom or something.”

The name and the case epitomized a larger conversation Bixler-Zavala wanted to have about the relationship between law enforcement and those in lower positions of power — particularly minorities and women. This is how “Holtzclaw” came to be the eighth track on In•ter a•li•a, celebrated Texas punk and post-hardcore act At the Drive In’s first original studio album release since 2000.

Thanks to its long hiatus, the band turned a lot of heads after it announced a reunion in October 2015 and, earlier this year, its new album. In•ter a•li•a, which follows the hallmark Y2K-era release Relationship of Command, was released May 5.

At the Drive In had another short-lived reunion in 2012. The band performed a few shows live but recorded no new music and was dissolved again by 2013.

Oklahoma City fans have their chance to relish in the historic and, in some senses, improbable reunion when At the Drive In performs 8 p.m. Tuesday at The Criterion, 500 E. Sheridan Ave. Mexican garage punk act Le Butcherettes opens the gig.

Bixler-Zavala said a lot of meaning can be packed into a name — particularly when it comes to Holtzclaw.

“I’m always interested in these names through history that a lot of people have,” he said. “They can easily pass you by, but they always stand out to me. Even bringing up the name [Holtzclaw] as an option for a song title struck some of the people in the band.”

Hinojos told him the name Holtzclaw sounded like some kind of sci-fi weapon or torture device. To Bixler-Zavala, however, it is far more sinister.

“I can look at that name every day and it just sends shivers down my spine,” he said.

Bixler-Zavala said it was important for the band to pick up where it left off in 2000’s Relationship of Command. It is often cited as a seminal post-hardcore album.

In attempting its follow-up project, At the Drive In tapped into a past era.

Musicians progress and change over time, but for bandmates reuniting after a nearly two-decade dearth of new output, Bixler-Zavala said it would almost be disrespectful to release another At the Drive In project that isn’t akin to what fans fell in love with in the first place. While songwriting, Bixler-Zavala (who also performs with bands The Mars Volta and Antemasque) chose to return to the headspace he occupied in 2000.

“It was great to get back to there because that’s what people wanted,” he said. “It would be really awful if we gave them this new, polished, ‘This is where I am today’ approach to At the Drive In.”

Bixler-Zavala said both “Holtzclaw” and In•ter a•li•a opening track “No Wolf Like the Present” speak in veiled ways of a centuries-long “war on ethnicity” by police and other governing powers.

Police-involved shootings and brutality against people of color might grab the most headlines, but Bixler-Zavala said the Holtzclaw case illustrates how male-dominated police forces also grapple with issues related to abuse of power. Holtzclaw allegedly used his position of authority and credibility, combined with threats of criminal punishment, to rape his victims and intimidate them into silence.

“It’s not just ethnicity,” Bixler-Zavala said. “There are gender roles [involved] in it as well.”

In•ter a•li•a’s sixth track, “Incurably Innocent,” is about speaking out after sexual abuse. Bixler-Zavala said the lyrics are based on the experiences of his wife, who was raped several years ago. He said she had to deal with an investigating police force that seemed to doubt her allegations and was not on her side.

Bixler-Zavala hopes songs like these ignite necessary discussions between police departments and minority communities and even between fellow officers within law enforcement.

“It needs to be treated less like mafia and with more accountability,” he said.

Bixler-Zavala said the relatives and friends of several At the Drive In members work in law enforcement. The band is not anti-cop and is sympathetic to the intense line of work.

“You hear stories about what they see every day, and you don’t want to act like some little asshole who’s just saying, ‘Fuck the police,’” he said. “And I think they themselves understand where that sentiment comes from, and it’s not just some stupid, hormonal, young-man-blues type of thing like, ‘Oh, I was in high school and they caught me partying.’ It goes so much deeper than that.”

Lyrically, Bixler-Zavala uses a lot of poetic, cryptic language when addressing topics of police brutality and abuse of power. His hope is that personal discovery will be more powerful and effective than direct confrontation.

“To me, that’s the best way to let that question pop up,” he said, “because it just shows you the mirror.”

A lot changed in the world during the hiatus between the band’s two most recent studio projects — or at least it would appear that way. Relationship of Command was released before 9/11 and the Iraq War. Former Presidents George W. Bush and Barack Obama completed four total terms before In•ter a•li•a was released.

Still, Bixler-Zavala said a lot of the dynamics between those in power and those without it have not changed much at all. What has changed is technology and the increased opportunity to witness and document wrongdoing when it occurs.

Smartphones and social media have helped vindicate many who have carried the social reform banner for decades.

“Some of us who have been talking about this and seeing it firsthand, we don’t feel so crazy anymore,” he said. “You can turn around to your friend who has the privilege of being shielded from certain concepts by a gated community and say, ‘I told you; I told you for a long fucking time.’”

Print headline: Gripping testimony, At the Drive In’s Cedric Bixler-Zavala explains how the crimes of convicted serial rapist and former OKC policeman Daniel Holtzclaw fed into the band’s return from its 17-year hiatus.

At the Drive In with Le Butcherettes