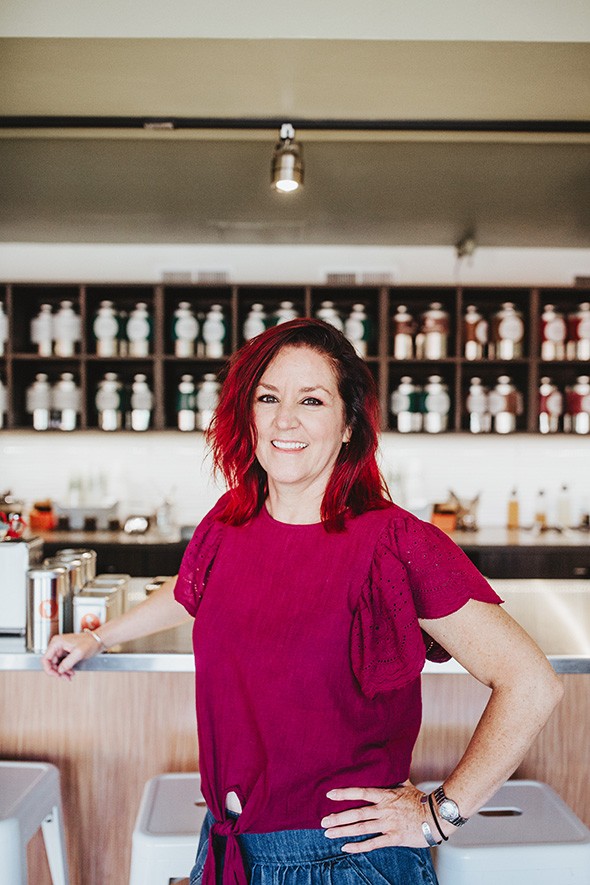 For the first time in a decade, Urban Teahouse’s owner arrives for a meeting fresh off doing some volunteer work with Restore OKC, a nonprofit working to bridge the city’s poverty gap.

After opening Urban Teahouse at its original location at May and Grand avenues 10 years ago and opening its current location at 519 NW 23rd St. in 2015, Kristy Jennings finally felt like the store would survive if she takes some time to give back to the community.

“It’s a nice milestone that I can leave,” Jennings said. “When I got to January of this year, I realized that I wanted to do something and not just work every day.”

She has been a member of Restore OKC’s board for a few years but finally has the time to work hands-on, like her recent visit to a community garden.

It makes sense since Jennings has been the city’s leading advocate for the taste benefits of whole dried tea leaves compared to its commercial bagged variety and of the health benefits of tea compared to coffee.

“Regular tea bags are ground up, not as fresh and don’t taste as strong,” Jennings said. “It’s better quality, and you can tell when you drink it. If you buy from a big company, it has to sit in a warehouse and truck, but with me, the supply chain is so much shorter. We have so many people that come in and say, ‘I’ve never had tea that tastes as strong.’ I don’t make the tea; I’m just a purveyor that is good at finding it.”

Urban Teahouse celebrates its 10th anniversary with a party 10 a.m.-2 p.m. Saturday as a way to honor past employees and regular and new customers. Jennings said there will be games and giveaways during the celebration.

The teahouse has a wide array of tea options, everything from traditional chamomile to blends like Pitta, which is lemongrass, mint, raspberry leaves, cardamom, licorice, mallow and rose petals. There are savory and sweet mixtures, like black tea with caramel pieces or black tea with cocoa beans and chili pepper pieces.

"I don’t make the tea; I’m just a purveyor that is good at finding it." — Kristy Jennings tweet this

Jennings’ customer base has expanded in recent years, as more people are looking for an alternative to coffee — something that provides a metabolism boost without the harsh effects on the stomach.

“People are more aware of things like matcha and how much caffeine it has and how much more focus they achieve,” Jennings said. “It’s super-focused energy and not scattered and fuzzy energy.”

Matcha has one of the highest levels of antioxidants on the market and is especially high in epigallocatechine gallate (EGCG) , the antioxidant that fights inflammation and helps maintain healthy arteries, according to Healthline. It also provides a caffeine boost that lasts three to four hours, compared to the crash of coffee.

Jennings said she isn’t one to over-promise on the health benefits of tea, lamenting how often she is asked for a specific weight loss tea, but notes that all teas are a good source of antioxidants, which fight against disease-creating free radicals.

The blend of tulsi mint is great for sore throats and respiratory issues. Tulsi, or Holy Basil, as it is known in India, is revered as an immune support herb. The blend also includes spearmint, rose hips, lemon myrtle and linden blossoms.

“I’m pretty conservative when people ask for weight loss tea,” Jennings said. “All tea is really good for you and boosts your metabolism as long as it has caffeine. Americans want to be told what to do, and that’s not how it works. I do it carefully and thoughtfully. We have people going through cancer treatment and things like that. Ginger and mint helps soothe the stomach, but I just don’t overpromise because some people can go crazy with it.”

In the last year, Urban Teahouse has added online ordering to its website. Jennings said it has helped with customers who are away at college and has made it easier for her more than 30 wholesale clients to reorder product. She lists coffee shops, salons, restaurants and bars among businesses stocking her products, but it is the use of tea in cocktails that gets her most excited.

Bars like nearby Ponyboy, Bunker Club and The Pump Bar offer cocktails that use tea rather than juice or soda-based mixers.

”Bartenders are crazy creative,” Jennings said. “I love those guys’ brains, and they don’t just use the tea; they’ll make a tincture with it or infuse the tea without using the heat process because the alcohol naturally extracts the flavor.”

Jennings’ mother instilled a love of tea in her at an early age. She said a semester abroad in Europe increased her interest in tea, but she didn’t really start to embrace drinking it again until her career in mental health work with a background in psychology.

“It was a comfort thing to start the day,” she said. “I never got into coffee because it’s harsh for me and my stomach’s more sensitive.”

After working in the mental health field for 18 years, she decided to look for a change. She worked with an alternative therapist for more than a year and credits the Richard Nelson Bolles self-help book What Color Is Your Parachute? for helping her find her new career.

“It’s for people who need a fresh perspective on how to know what you’re innately good at and not just what you’re good at because it’s what you’ve been doing for 18 years,” she said. “That’s where most of us are when we get to the age of 35.”