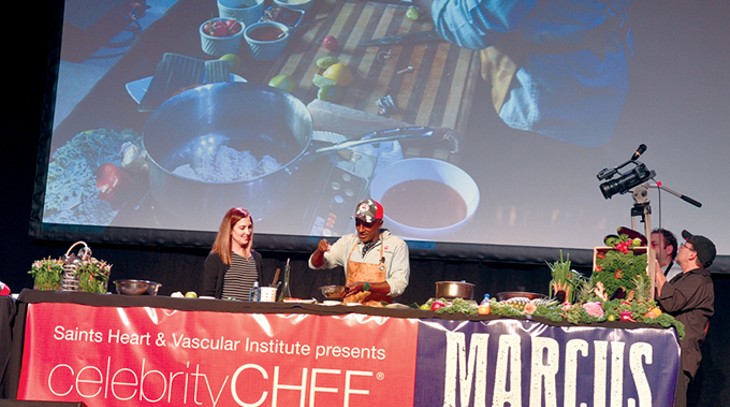 Whether it is as a judge on the reality cooking show Chopped, winner of a Top Chef Masters or becoming the youngest chef to ever receive a three-star review from The New York Times, celebrity chef Marcus Samuelsson’s worldview is influenced by his time as an immigrant.

Born in war-torn Ethiopia, Samuelsson learned to cook from his Swedish grandmother after emigrating as a refugee from Africa to Eastern Europe as a toddler. His cooking career took him across Eurasia before he settled in Harlem, where his Red Rooster restaurant has preached sustainability in a neighborhood where that was difficult to pull off when it opened in 2010.

“I was an immigrant six times in seven years,” Samuelsson said to a crowd of 700 guests Feb. 15 at Chevy Bricktown Events Center for the eighth St. Anthony Celebrity Chef event.

“When people say that immigrants are lazy, I know that I’m not lazy, and I think a lot of immigrants have more love for this country than people born here who take things for granted,” Samuelsson told the audience to one of the largest applause breaks of the evening.

He answered questions from the crowd and invited volunteers from the audience to help him prepare three dishes designed to show that healthy eating doesn’t have to lack flavor.

He prepared a Peruvian ceviche with hamachi, which uses only fresh lime juice to cook the raw fish, and paired it with shiitake mushrooms, radishes and cilantro.

He followed with a baked halibut topped with freshly grated horseradish, which goes from spicy to sweet during the roasting process, and paired it with a sauce of coconut milk, lime juice, sliced granny apple and bok choy.

The final dish showcased his native Ethiopia, in particular the spice blend berbere, which features dried chiles, garlic ginger and basil, among other things. Samuelsson added berbere to a sauce with pulled chicken that was cooked in a steamer and served with roasted carrots over couscous. 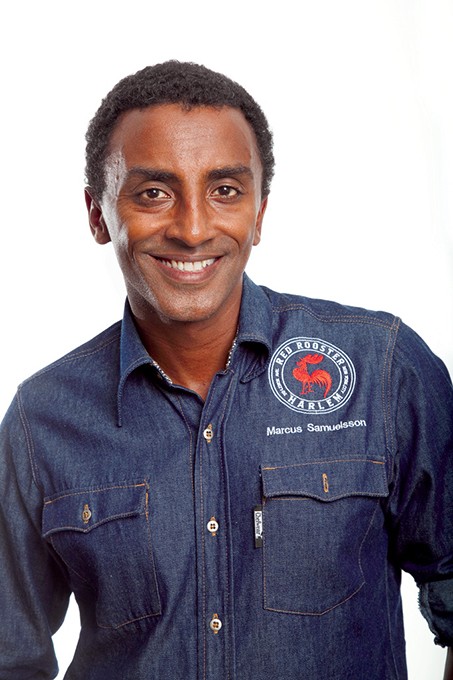 During the hourlong cooking demonstration, Samuelsson discussed active ways people can take ownership of eating healthy, something he expounded upon during a pre-show interview with Oklahoma Gazette.

He encouraged people to look beyond organic and search for ingredients in season and from local producers.

“Instead of focusing on whether something is organic or not,” Samuelsson said. “Obviously, it’s a big buzz word, but if we’re flying [organic produce] from Australia, it might not be sustainable. The two words you want to hold onto are ‘seasonal eating’ and ‘local’ as much as you can. In my own family, my wife thinks organic is better; I say, ‘Sometimes it is; sometimes it is not.’”

He said residents in Oklahoma, in the heartland of the country, are positioned to have great access to farmers markets and fresh meat and game, and he urged consumers to evolve with trends.

“Today, you can order so much online. Just because you click, it doesn’t mean you aren’t part of the conversation,” he said. “Food can be local but not sustainable based on how the food is shipped to me. You want to ask more questions: ‘How did it get to me? How was it picked? Was it frozen?’”

In effort to curb the country’s food waste — upward of 35 percent of food is thrown away — Samuelsson said meal planning should be done to think about how to re-use ingredients to create a new meal.

“Buy a whole chicken and use the breasts one day, use the chicken thighs the next day and then maybe a pulled chicken salad the next day with kale, Brussels [sprouts] and a buttermilk vinaigrette,” he said. “You can use the leftover bones to make broth, poach some eggs, and now we have brunch.”

Samuelsson has been a fixture as judge and contestant for many of the most popular competitive cooking shows, beginning with Chopped 10 years ago.

The breakout Food Network hit gives contestants a mystery basket of ingredients they must use in appetizer, entrée and dessert courses, and Samuselsson said the key is avoid a technique outside a chef’s comfort area.

“The hardest round is the appetizer because you only have 20 minutes,” Samuelsson said. “You want to have flavor-driven food that you can cook quickly. A great appetizer is ceviche or crudo — something that is high on flavor and acid, but it doesn’t require a long cooking time.”

After a decade on television — including a powerful 2015 episode of Anthony Bourdain: Parts Unknown where he visits Ethiopia — Samuelsson is debuting his own series, No Passport Required, on PBS this summer.

A partnership between Public Broadcasting Service (PBS) and Vox Media (founders of Eater), the show will feature six episodes in which Samuelsson highlights the food of immigrant communities in the United States.

“We talked about what TV show we can do that fits this very moment that we’re in right now. As an immigrant, I felt it was important to tell strong immigrant tales,” he said, noting that it will feature Vietnamese culture in New Orleans, Ethiopian culture in Washington D.C., Haitian culture in Miami, Mexican culture in Chicago and the Arab American communities of Dearborn and Detroit.

In his latest visit to Oklahoma City, Samuelsson said he was excited to see growth in the city since the last time a cooking appearance brought him in town.

“As I walked around today, I went to Deep Deuce and then the opposite part of town,” he said. “It’s grown a lot, and that’s amazing to see. There are more jobs and events. I had a great cup of coffee at Elemental [Coffee Roasters], and that was a really interesting part of town.”