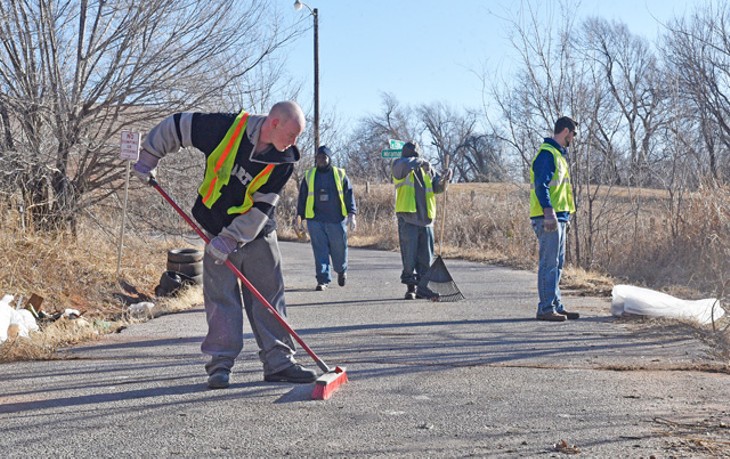 When Korey Keaton was assigned GPS monitoring after being released from prison for drug possession, he knew he needed help finding a job. While he had come out of prison before and found jobs, keeping employment and staying out of trouble was another issue.

“I’ve been in and out of the system since the ’90s, and I really haven’t had any resources to fall back on for help,” the 41-year-old told Oklahoma Gazette. “Now, I can go out there and get a job, but it’s getting harder.”

In December, when Keaton sat down with a parole officer, he asked about a program he heard about called CEO, or The Center for Employment Opportunities, a national program with 18 centers in six states, including Oklahoma. His parole officer made the referral to CEO, but it was up to Keaton to call the employment program for parolees or probationers. Motivated, Keaton called, claiming his spot in the four-day life skills course right before the Christmas holiday. After only a few days, Keaton said he was convinced it was the program to aid him in his re-entry to society and ultimately help him stay out of trouble.

In late January, on a sunny but cold morning, Keaton was one of a dozen men clearing an illegal dumping site in northeast Oklahoma City. Dressed in layers with a bright yellow safety vest and steel-toed work boots, Keaton stacked tires and picked up debris. A day earlier, Keaton spent the day at CEO’s Oklahoma City office, updating his resume with a job coach.

“I am looking for warehouse [work],” Keaton said as he explained he has his forklift license and a desire to complete heavy equipment training. “I like everything. I am a hands-on guy. I wouldn’t mind being on a road crew, bridge crew or construction crew. I don’t mind doing or learning. It’s just getting my foot in that door where I have a chance to learn.”

Breaking the cycle of recidivism, or the “revolving door” in and out of prisons, requires a new approach to employment  — transitional employment.

That’s what CEO provides parolees or probationers with felony convictions coming out of the criminal justice system. The New York-based organization’s model puts people to work within days of their release from prison because of agreements with state and local agencies. The government agencies contract with CEO, which employs and supervises the participants, to perform tasks.

“The conversation is shifting to ‘How can we support these individuals?’ rather than putting them in jails or prisons and hoping for the best when they get out,” said Pat Viklund, CEO’s Oklahoma City director, from his office at 228 Robert S. Kerr Ave., Suite 600, a block away from the Oklahoma County Courthouse. “I think everyone recognizes that a job is critical to success.”

About four years ago, the national program opened an office in Oklahoma City, taking men and women tackling the employment barrier that has long stood in the way of those recently released from prisons or jails. Businesses are generally hesitant to hire the formerly incarcerated, who might have limited work experience and low educational attainment.

While government agencies and nonprofit organizations have long helped the formerly incarcerated find employment after prison, CEO provides a job and a daily paycheck to its clients right away, which is a benefit for those who have legal bills and fines or child support bills to pay following their release. Over the course of two to three months, CEO’s job coaches support participants in their development of both soft and hard skills and connects them with employers paying above minimum wage.

Inside CEO’s Oklahoma City office, snapshots of program alumni who have held jobs for 12 months are displayed in the lobby. Viklund pointed out several, sharing the former participant’s name and what they do for a living now. The program offers incentives to its participants to stay employed and ultimately make better choices, he said.

Since 2013, CEO’s Oklahoma City office has made 500 full-time job placements.

“The idea is to push our participants to attachment to the workforce so that they don’t end up in prison or jail,” Viklund said. “We want them in the community, working and taking care of their families.”

Between 200 and 250 clients come through the doors of OKC’s CEO office in a year’s time. New clients, who are referred to the program by parole officers, undergo a four-day life skills course, or a crash course in resume building, interview skills and common employment practices. In those initial four days, CEO volunteers — often local business leaders — conduct mock interviews with participants.

On Thursday afternoon, CEO staff passes out steel-toed work boots, which signify the next phase of the program, transitional employment. The next day, the work begins.

CEO partners with the municipal governments of Oklahoma City, Edmond and Moore. At 8 a.m., 15-passenger vans filled with about a dozen clients travel to those municipalities for work, which can range from roadside maintenance to decommissioning police vehicles. At the end of the workday, around 3 p.m., each participant gets paid at a rate of $7.25 an hour.

“It helps someone have some cash in their pocket when they are really vulnerable and, in many cases, don’t have anything,” Viklund said.

One day each week, participants receive career mentoring and life skills guidance from job coaches who work to establish relationships with local employers. Job coaches refer participants to employers, where they complete job applications and often earn an interview. Participants may work for CEO for 75 days.

“We are trying to get them ready for the workforce,” Viklund said. “After we determine that they are, we set them up for those interviews. We don’t give them a list of employers and send them out.”

Part of the career mentoring includes help with wardrobe, thanks to donations by community members. Perhaps more importantly, participants are coached on how to answer questions about their criminal history and felony convictions. Viklund said participants are encouraged to answer the question honestly and transparently but also highlight their progress in the CEO program and motivation to work.

Part of the conversation

Over the past decade, CEO officials say they have placed 25,000 formerly incarcerated individuals in full-time employment nationwide. Six years ago, an independent evaluation of the program showed a recidivism rate between 16 and 22 percent lower than the general rate.

In September, the Oklahoma City Council approved a six-month agreement with CEO, which is set to end Feb. 28. Viklund explained feedback from city staff, as well as Ward 6 Councilwoman Meg Salyer, has been positive. Salyer shared she is supportive of the program continuing.

“Criminal justice reform is a giant topic on all of our minds,” Salyer said. “Being able to creatively use programs that help keep people out of jail, change lives but are also more fiscally responsible.”

Viklund contended that CEO has a part to play in the local conversation around criminal justice reform and breaking the cycle of re-incarceration.

“With the national conversation on criminal justice, people are recognizing that we need a smarter way to support our communities and people who made a mistake,” Viklund said. “We are changing that conversation too.”

Print headline: In OKC, the Center for Employment Opportunities is lowering recidivism statistics one parolee at a time.