Construction will resume on The American Indian Cultural Center and Museum this spring. 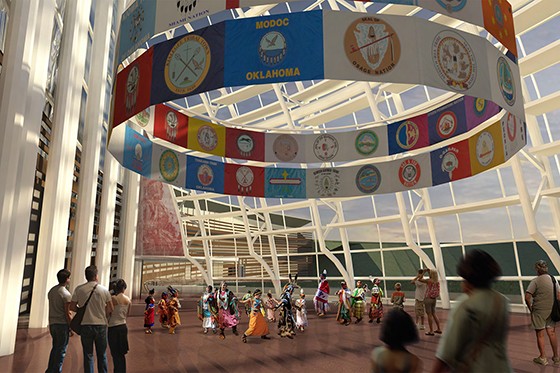 A long-delayed museum will resume construction this year.

The American Indian Cultural Center and Museum (AICCM) is accepting bids through Jan. 7 to complete the facility, 659 American Indian Blvd., near the Boathouse District.

“There is one portion of the structure that has not been enclosed yet. That was bid on recently, and we’re about to award that contract after the first of the year, and that’s about $9 million,” said Tom Wilson, president of Architectural Design Group (ADG), a local design and management firm that serves as the agency representative of the cultural center.

The total construction budget is $37 million, Wilson said. The interiors of the building have not been constructed, and some of the exteriors remain unfinished, so ADG is looking for companies that can fully complete the facility.

“We are looking for all trades — mechanical, electrical, lighting, sheetrock, finishing, flooring materials — literally everything that you can see in a building,” Wilson said.

The goal is to open the cultural center by spring 2021.

Located at the crossroads of America, where four interstate highways intersect, The American Indian Cultural Center and Museum is expected to be a world-class facility with hundreds of thousands of visitors a year.

“The heart of this and the main attraction for people coming to visit is that they’ll get to experience living, breathing Native culture,” museum director Jim Pepper Henry said. “We’re going to have a very robust program schedule here at the cultural center where we’ll have members from the different tribes sharing their heritage with visitors through dance, through song, through performances, through art demonstrations, through storytelling.”

Development began in 1994, following creation of the Native American Cultural & Educational Authority (NACEA), a state agency charged with planning and design for the facility. Construction on the project originally began in 2006 but was suspended in 2012 when state funding ran out, leaving the facility unfinished. In 2015, Oklahoma City was given the responsibility to complete the project. The Chickasaw Nation partnered with the city to help.

When Pepper Henry was named director of the museum in 2017, he was tasked with building the organization to manage the facility. To that end, he also serves as CEO of American Indian Cultural Center Foundation, the fundraising arm of the project that will be the operator once it is complete.

“Much of the staff from the NACEA has transitioned into the foundation, so some of the employees that were at the state agency are now employees of the foundation. That’s how we built our staff,” Pepper Henry said. “They’re continuing the work that they were doing before, but they’re now doing it for the foundation.”

The building was designed nearly 20 years ago, so Pepper Henry and his team looked at the design and made changes to modernize and make the facility more efficient.

“We took a little time to kind of refresh the interior and rearrange some things to make the user experience much better and to help us on the operational side,” he said.

“The heart of this and the main attraction for people coming to visit is that they’ll get to experience living, breathing Native culture.” — Jim Pepper Henry tweet this

Lighting systems were upgraded to LED lights, phone booths were removed and replaced with water bottle filler stations and all major exhibits were moved to one area.

“In the museum world, when you have collections on display, they have to be environmentally controlled consistently, meaning keeping the temperature around 72 degrees and the relative humidity at 50 percent,” Pepper Henry said. “That’s hard to do when you have a 173,000-square-foot facility and you have things spread out all over the place.”

By concentrating all exhibits into the south wing, operators can control the environment in that area consistently and have more fluctuation in the rest of the building, which saves money.

The kitchen was also expanded to accommodate catering, which will help generate revenue.

✖ “The heart of this and the main attraction for people coming to visit is that they’ll get to experience living, breathing Native culture.” — Jim Pepper Henry
click to tweet


“We have such a beautiful facility that we know people are going to want to rent for events and activities and weddings, and so we want to be able to cater those events,” Pepper Henry said. “Now that we’ll have a large kitchen, we can also have a full-service restaurant featuring unique, one-of-a kind Native menu items based on traditional foods.”

The goal is to source directly from the tribes as much as possible to produce a traditional menu with food that is indigenous to the region.

“It’s kind of like a farm-to-table. I call it a ‘rez-to-table’ concept,” Pepper Henry said. “We’re going to have one of the most unique menus of any restaurant in Oklahoma, and it’s going to be really good food and good for you.”

Another way to generate revenue is through a gift shop, which will focus on the sale of one-of-a-kind handmade items by Native American artists. This will also serve as another way to showcase the Oklahoma tribes’ culture and art.

“I think it’s going to be a really important revenue generator not only for the museum, but also to help sustain and perpetuate and promote the artwork and items of our Native artists here in Oklahoma,” Pepper Henry said. “Through the gift shop, you’re going to see the great artistry of many of our talented artists.”

Exhibits will be bid on later this year because the building must be complete and pass certain inspections in order to get loans from other museums, Wilson said. However, the design is for the galleries to have two levels.

The main exhibit will be the Okla Humma Gallery, which aims to tell the collective history of the 39 tribes through the perspective of Native peoples.

“We can’t tell the in-depth story of every tribe,” Pepper Henry said. “What we can do is talk about the common circumstances that brought all the tribes to Oklahoma and what happened to the tribes once they arrived and how the tribes persevered through difficult times to reclaim self-determination and tribal sovereignty and how the tribes are in a cultural and economic renaissance right now.”

The Mezzanine Level gallery will be for changing and touring exhibitions. The first exhibition will be a 10-year loan from Smithsonian Institution, which will essentially serve as a time capsule of 100-year-old Native items.

AICCM also houses four performance and film venues that can host a variety of community activities and live performance events, an interactive discovery center and an 85-acre cultural park along the Oklahoma River with self-guided walking trails and areas for Native sports and concerts.

Pepper Henry said he’s proud of the holistic approach to showcasing the richness and diversity of the tribes. In more than 30 years as a museum director, he said that a project has never meant as much as AICCM means to him.

“This will be the most important project I’ll work on in my professional career because I’m a member of one of the tribes here in Oklahoma. I’m an enrolled member of the Kaw Nation; I’m also Muscogee Creek. Every one of us that works here is an enrolled member of a tribe in Oklahoma, and this means so much to us because we’re telling our story,” he said. “I’ll never have an experience like this anywhere else where this means so much personally.”

Construction on AICCM is set to resume sometime around March.