Chae Modern Korean serves up a menu of tantalizing options

Ask me where I want to go to dinner. Go ahead. Nobody cares that you’re talking to a newspaper. Just ask.

Chae! I want to go to Chae. Are we ready to go now, or do you need to get dressed? What’s up? What is taking you so long? Let’s go!

Ahem. My apologies. I get a little “turnt,” as the kids say (but not to me) when I think about Chae Modern Korean, 1933 NW 23rd St. It’s one of my favorite places to eat.

Oklahoma City’s food scene has grown by leaps and bounds in recent years, and Chae absolutely is a product of that. Owner Daniel Chae brought together a dream team of hungry young chefs, bar staff and servers to create an experience that is only getting better after a pretty spectacular start.

Speaking of starts, prepare to order some appetizers. Actually, prepare to want to order every appetizer but know that you shouldn’t.

I would tell you to try the buns, but that’s a lot like asking someone to try a highly addictive narcotic. Once you have a pork belly bun ($7), it will become your default order every time. I don’t even think I ask for one anymore. The staff just sees my car drive past and puts the order in because there’s no way I’m not getting one.

The bun is a beautiful, tender, sticky little piece of taut bread ever so gently folded around a stack of roasted pork belly that aches to disintegrate in your mouth. Pickled onions and green onion slices stick to the meat with a glue of spicy sauce.

Some of the other appetizers are a bit more mundane but no less delightful. Mandoo ($5) are fried dumplings good enough to start and end fights. Kimchi arancini ($8) combine the spicy pluck of kimchi, the creamy allure of risotto and the crispiness of the fryer.

Shishito peppers ($8) are gorgeous grilled peppers in a tart poke sauce. This is greedy food. Mine, mine, mine. Get your own.

But the chicken wings ($7) are the real MVP. Don’t expect hot wings. Just expect wings that are hot. They’re sauced after the whole wing is fried, and the challenge is to leave without wearing the remnants on your shirt. I failed that challenge many times.

Oxtail soup ($12) is a revelation. The consommé broth is luxuriously creamy with a flavor so rich, you’ll fight the twin impulses of feeling full and desperately wanting to keep eating. It’s infuriating how tasty it is because — like the pork belly bun — you’ll be hard-pressed not to order it every time. 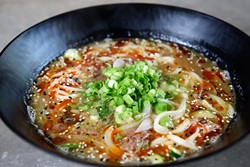 For the meat-averse, soondubu ($11) is an intoxicatingly spicy blend of broth, silky tofu and rice. It’s hot but so good, you will slurp through the pain.

And as long as we’re talking about hot stuff, the iron bibimbap ($24) is a meal that is meant to be shared. I won’t share it — please stop asking me — but that’s how it was meant to be served. It’s a giant pile of perfectly cooked rice sizzling inside a cast-iron skillet and covered in beef short ribs, vegetables and eggs. Take your pictures first because once it’s stirred up, it’s not as beautiful. But it’s still so delicious it’s almost unfair to other foods cooked in cast iron.

Pancakes? Bacon? Chili? Take that weak stuff to a nonstick skillet. After the iron bibimbap, nothing else deserves to share the cast-iron spotlight.

Bulgogi ($22) is similar but not quite as good. It feels ridiculous to ding Chae over this later addition to the menu because it’s good. At any other restaurant, bulgogi would be the bulgo-to dish. But this blend of marinated beef, vegetables and rice is incomparable to bibimbap, oxtail soup, buns, wings and soondubu.

Chae’s menu is like the 1992 Dream Team; Christian Laettner and John Stockton were great basketball players, but on a team with Michael Jordan, Larry Bird, Magic Johnson and Karl Malone, they look downright inessential.

Now ask me where I want to go to dinner. Hello? Did you close this review so you could go to Chae right now? Good choice.

What works: The oxtail soup, pork belly bun and iron bibimbap are essential.

What needs work: The lack of banchan is disappointing.

Tip: Soju is delicious and dangerous. Drink up and get an Uber.