While Oklahoma already reckons with effects of climate change, a primarily youth-led movement seeks sweeping reform to address the crisis. 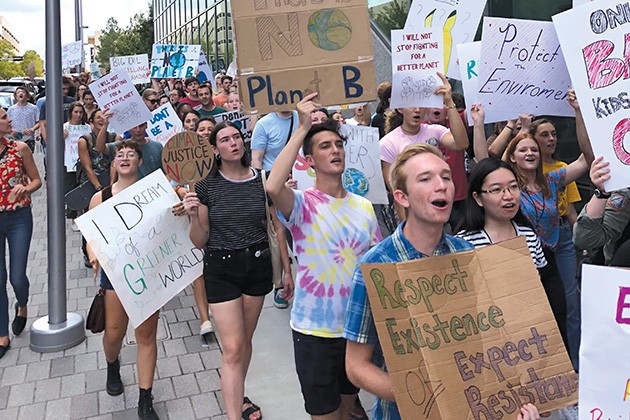 Ninety-seven percent of climatologists agree that human activities result in a warming climate. That’s why late last month, hundreds of Oklahomans took to downtown as part of the global youth climate strike.

“First, we need to liberate the folks who are being disproportionately affected by climate change and who can’t fight the battle against the climate crisis because they’re too busy surviving everyday things like flooding, like food scarcity and like water availability,” he said. “Then we need to get people agitated about the climate crisis by educating them on what the effects of climate change will look like in their communities. … Then the last thing is revolt, and I think that’s a word people are scared to use. But sans revolution, the planet as we know it will no longer exist. Everything we do fundamentally and structurally as a nation has to change if we hope to continue at all. There is no tomorrow without revolution.”

While the climate strike movement brings more attention to the climate crisis, Salcido said there is a lot more work that needs to be done. Salcido, along with Gant Roberson, another former climate strike state lead, are using the momentum from the strike to launch Enviro Justice OK, an “anti-capitalist, anti-fascist” organization demanding more action to address climate change.

“We’re going to file for our nonprofit status and hopefully the following that was interested in youth climate strike will just follow us over,” Salcido said. “There was a little bit of hesitancy from the local team because I think people are scared of saying things like, ‘We are anti-capitalist.’ … But, frankly, the climate problem is so pervasive, that the answer is going to have to be an answer that overwhelms us. Any kind of answer that doesn’t shock or surprise us is probably not going far enough.”

Salcido encourages people who are passionate about environmental justice work to join Sierra Club of Oklahoma. They can also follow the new organization on Twitter and Instagram (@envirojusticeok).

“Anti-capitalist work is going to look like, specifically here in Oklahoma, is having harder conversations about what regulations are going to look like on corporations that are large carbon emitters,” Salcido said. “We have Devon, we have Chesapeake, we have Chase — these are all corporations that have a vested interest in doing something that hurts us. What hurts us is that they pollute freely with little to no consequences and with no financial penalties.”

“There is no tomorrow without revolution.”
— Matthew Salcido tweet this

While climatologists overwhelmingly agree on and support the evidence of climate change on a purely scientific basis, the conversation is political to some who deny the evidence and instead call it a hoax. For example, Oklahoma Sen. James Inhofe, who notably brought a snowball to the Senate floor in 2015 as an attempt to discredit global warming, spent last week “recognizing some of the most notable climate hypocrites” on Twitter.

But a thermometer won’t give you a different number based on how you vote, said Dr. Barb Mayes Boustead, alluding to a common maxim from award-winning atmospheric scientist Katharine Hayhoe.

“The data that comes from our temperature records are the same no matter who looks at it, and it shows the same story of temperature changes and weather pattern changes through the years,” said Mayes Boustead, a meteorologist and climatologist serving as an instructor at National Weather Service in Norman.

Climate change is a complicated issue that requires a lot of layers of society to address. However, the first step is to accept that there is a problem that requires deviation from the status quo, which she said can be hard for people with particular worldviews.

“That’s where this political divide really stems from. It’s not a matter of people being dumb or smart about science,” she said. “It’s a matter of making our very scientific observations fall in line with what we want our worldview to be, and that is a really difficult leap in some circumstances. … It’s hard to convince somebody to change that which their livelihood depends on. Well, what does a lot of our livelihood in Oklahoma depend on? Oil and gas. So it’s very natural that there’s a lot of resistance to understanding and accepting the evidence of climate change.” 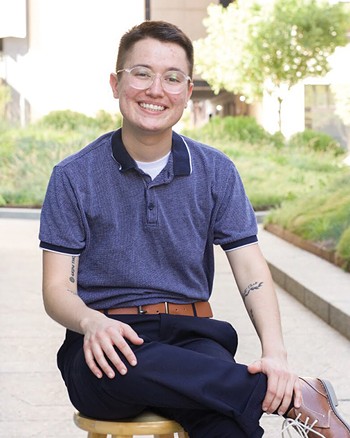 Climate change affects everything from infrastructure to vegetation to how far diseases can spread, Mayes Boustead said. She said it’s difficult to find an area of society that would not be affected by climate change.

“There are five key takeaways about climate change: it’s real, it’s us, we’re certain, it’s more bad than good — a lot more bad than good — and we can still fix it,” she said. “By bad I mean two things. I mean expensive. First of all, climate change will be very, very expensive — it already is, and it will continue to be. And it will cause casualties.”

Climate change already underlies every weather event that happens, Mayes Boustead said. However, it takes a long time to be able to pick apart the exact impact on weather patterns. Oklahoma City’s climate is now very similar to what it used to be 30-40 years ago by the Red River.

“And in about 50 years, if we keep changing on the current track, the climate in Oklahoma City is going to look a lot more like what it is in Houston right now. If this is the climate you really love that we have here right now, you’re going to have to go all the way up to about Lincoln or Omaha, Nebraska, to follow it in 50 or 60 years,” Mayes Boustead said. “The coldest locations are changing the fastest, so for example, the poles are changing faster than the equator. The coldest times of year, so winter, is warming faster than summer.”

Oklahoma’s winter outlook depends on various factors, but Mayes Boustead said there is a tilt toward this winter being warmer than normal. In terms of severe weather, the research as it relates to climate change is still in its infancy. However, Mayes Boustead said scientists look at trends in environments that support tornados.

Mayes Boustead and Salcido said changes have to happen at national and global scales to truly address the issue as a human species. However, Mayes Boustead said there are small things people can do every day to reduce their carbon footprint, like carpooling, eating less meat and relying slightly less on A/C and heating.

“I want people to give themselves a little forgiveness for what we have to do to live our lives but at the same time look for the opportunities that would be healthier for the environment,” she said. “I’d like to steer people toward well-researched sources of information about climate change, and one of the best of those is climate.gov. You also have information at noaa.gov and nasa.gov. … You’ll notice I didn’t once use the phrase ‘believe in climate change,’ and I hope you don’t either because it’s not a belief system. It’s evidence.”