Civic Center Music Hall management will likely transfer from the city to private control this summer. 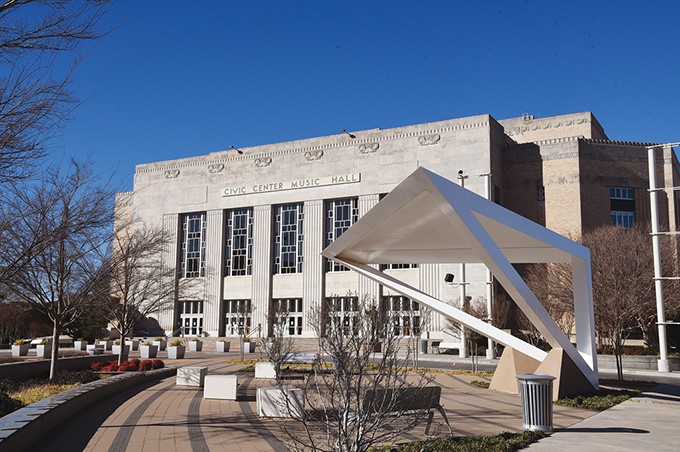 Civic Center Music Hall has been linked to the City of Oklahoma City for decades, but the city’s relationship with the venue will likely soon shift from operational manager to hands-off landlord.

In June, Oklahoma City Council is expected to approve handing over general venue operations from the city to the nonprofit Civic Center Foundation, which manages the venue’s OKC Broadway series. Though a date for the council vote has not been determined, July 1 is planned as an official transition date.

The city began internally discussing such a transition several years ago and started moving forward with the concept in 2016.

Civic Center Foundation executive director Elizabeth Gray said the organization adopted a “walk before you run” approach to grabbing the reins on venue operations. The foundation took control of the city’s Broadway series in 2016 through a partnership with national Broadway and entertainment presenter Nederlander Organization. Civic Center Foundation also took over concession and drink operations within the venue, expanding the offerings.

The retirement of key Civic Center management over a year ago opened the door for the foundation to take over all operations and management from the city.

“This is the ‘run’ version of the model,” Gray said.

The privatization of management is expected to not only free up city funds but will keep the money generated by Civic Center within the venue. It will also be a more efficient way to maintain the facility, addressing things as they come up instead of relying on uncertain bond issues and the flow of city tax dollars.

Gray said Civic Center Foundation is not only prepared for its new role, but eager to take over.

“[We are] ready and very excited for what we can bring to the table,” she said. “Not only from an operations standpoint, but for reinvestment back into the facility.”

Around five years ago, the foundation commissioned a venue utilization study in partnership with the city. Their goals at the time were to determine the optimal way to use all five of Civic Center’s available theater spaces and understand how to approach renovations and upkeep in a more efficient manner.

Through the study, Civic Center Foundation learned that many publicly owned arts venues across the country are privately managed. Gray and the foundation studied a number of similar models in different cities.

Perhaps the greatest benefit private operations present is the ability for a venue to make improvements on the fly and in a way that is convenient for them.

“Performing arts venues have to be very flexible by nature, given the industry that they host,” Gray said. “It was a model that we studied across the country.”

"[We are] ready and very excited for what we can bring to the table." —Elizabeth Gray click to tweet

Under their new agreement with the city, Civic Center Foundation will assume the venue’s operating costs as well as the risks and liabilities the city was formerly shouldering. Kupper said private management is the best long-term scenario for Civic Center.

Civic Center staff is currently employed by the city, but all of those positions will be absorbed by the foundation on July 1. Employees have been given the option to either keep their current position and move over to Civic Center Foundation or leave and be transferred to another role under city payroll.

Gray said many employees have chosen to stay and those who are leaving are mostly doing so to keep their city-held tenure benefits. She estimates that 80 to 90 percent of the current staff will return.

“That’s great because they’re really the ones that have been here for so many years and make it work and have all the historical knowledge,” Gray said.

Once Civic Center costs are off the city books, the funding formerly devoted to venue costs will be redirected in other ways within the city, though those ways have not yet been determined.

“It could be reformatted into additional police officers, firefighters, parks and rec staff, public works, pothole crews,” Kupper said. “This is an opportunity that frees up the general fund dollars to city-related things.”

Even after the agreement is finalized, the city will still have ownership of the building and the foundation will still report to City Council.

“I will basically be [Civic Center Foundation’s] landlord,” Kupper said. “I will take the agreement and all of the reports and stuff that they have to file with us, and I am responsible that they continue to operate that building in a sound financial way.”

Gray said Nederlander is often called “royalty of the Broadway industry.” The presenter has produced for and managed venues for more than 100 years and manages theaters in places as far away as London. It is likely that theatergoers in the city have noticed an improvement in programming since OKC Broadway entered into its partnership in 2016, as Nederlander works directly with Broadway to bring nationally touring shows to distant audiences.

“We were very fortunate to attract their attention,” Gray said of Nederlander.

City residents are not likely to notice a big difference in programming at the privately managed Civic Center — at least not at first. However, within the next few years, Gray would like to bring more one-off and specialty shows into the venues.

Within the next couple years, pop music concerts and nationally touring comedians could become a more regular presence at the venue. These efforts are already ramping up. Norman-born country music star Vince Gill, for example, is scheduled to perform at the venue Aug. 18.

Through its relationship with Nederlander, the foundation also plans to bring a statewide high school theater competition to Civic Center within the next couple of years. The state contest will be a feeder program into the New York-based National High School Musical Theatre Awards, commonly called the Jimmy Awards.

The foundation is also exploring ways it can offer more community and free-to-the-public events within the next couple of years.

With all of that said, Civic Center Foundation remains dedicated to resident organizations like Oklahoma City Philharmonic, Oklahoma City Ballet and Oklahoma City Repertory Theatre (CityRep) who already make the venue their performance home. With so much going on, it can be challenging to find openings for one-off attractions.

“We have a very compressed schedule,” Gray said. “But there is the occasional open evening, and we want to get more comedy, more concerts. People are already starting to see that.”

Gray said this new arrangement should only bolster the art and entertainment opportunities available to city residents. Civic Center Foundation and city government have worked in harmony for years before this, and she is hopeful they will continue to build upon that in the future.

“We’re looking forward to maintaining that relationship and making it even more beneficial than it has been — for both parties,” she said.