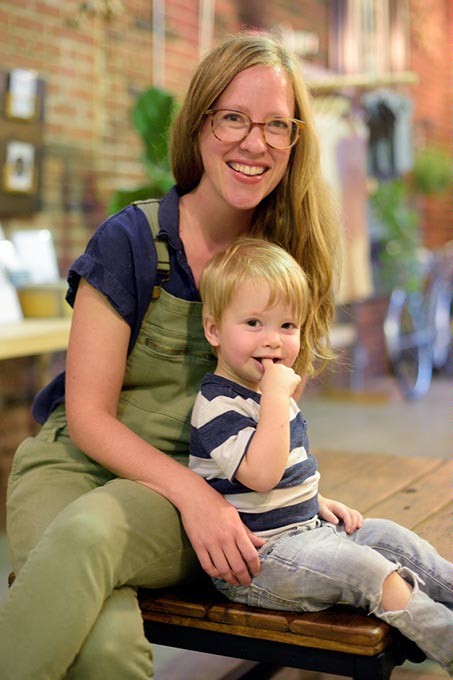 A decade ago, when Lindsay Zodrow was preparing to open her handmade boutique in Oklahoma City’s urban core, she imagined a shop that went beyond selling goods. When shoppers entered Collected Thread, Zodrow stood ready to assist in finding the perfect gift or treat. Often, she introduced people to the area, named local restaurants and other shops and, at times, offered words of comfort.

“I wanted to create a safe place for people,” Zodrow said from inside her business located on NW 16th Street in the Plaza District. “If someone was having a bad day or was stressed out, this would be their place of peace. I feel we have achieved that. I fill a grander purpose than selling things to people.”

The dramatic shift by consumers from brick-and-mortar stores to the Internet hasn’t been easy for Zodrow and retailers throughout the country. While Zodrow also maintains an online shop, fewer transactions are taking place in the shop. When she visits with other shopkeepers about the retail climate, the conversation holds references to a downturn in the local economy and customers choosing to shop online. The overall conclusion is, “Retail is never going to be the same.”

“I keep hearing about stores that are closing their brick-and-mortar location and going online-only,” Zodrow said. “I am done if that is my only option. I need interaction with my customers. That is such a vital part. I can’t be in a warehouse, just doing sales.”

Earlier this year, when Amazon agreed to begin collecting and remitting state and local sales taxes in Oklahoma, state and municipal leaders celebrated. The agreement with the online retail giant was a long time coming, as the Sooner State became the 40th state with an Amazon tax collection deal.

Of course, one could argue that Oklahoma’s agreement was more meaningful than any other states’, as its cities rely exclusively on sales tax to fund general operations budgets. Unlike any other state in the union, Oklahoma municipalities cannot tap into property tax revenue to fund essential services, which include public safety, roads, parks and more. It all comes down to sales tax, which is a dwindling revenue source when taking into account the rise in online shopping, especially with Amazon, which seeks to serve customers with unrivaled choice, price and delivery speed.

With numbers from Civic Economics and the American Booksellers Association that estimated Amazon sold $644.6 million in retail goods while dodging as much as $56.6 million in combined state and local sales taxes in 2015, the Amazon agreement is paramount.

In May, Oklahoma City received its first check from the Oklahoma Tax Commission reflecting taxes collected by Amazon. Collected as a use tax, Oklahoma City recorded $4.9 million in use tax collection, an increase of $1.39 million over the previous month.

The Seattle-based company remits collections as a use tax, which is a tax method for out-of-state purchases. As a private company, there is no way to know exactly how much Amazon remits to the state or municipalities. Oklahoma City officials, along with Edmond and Norman, are reporting surging use tax collections in recent months.

As of September, Oklahoma City reported a 19 percent increase in use tax collections when compared to the previous year, which is “very significant growth,” according to Doug Dowler, City of Oklahoma City budget director.

After two straight fiscal years where Oklahoma City leaders witnessed a decline in sales tax collections, the use tax growth is a positive trend.

Not since 1987 has the city recorded two straight years of dwindling sales tax. As in the 1980s, city officials point to the downturn in the oil industry as a major contributor to low tax collections. There is a trickle-down effect on the local economy whenever jobs are cut because of low oil and gas activity. Consumers and businesses alike tighten their wallets.

Another contributor is consumer habits, which includes online shopping, but also shifting from a product-based economy to a service-based economy. By a quick click on the Internet, a song, book, movie or video game is purchased or rented as a digital file, not tangible products from a retailer.

“It really does seem like our economy is changing to a more service-based economy with less focus on goods,” Dowler said. “I think that will present a long-term challenge to us as dependent as we are to sales tax.” 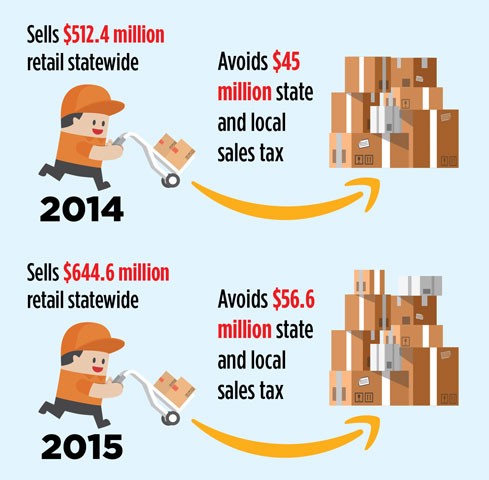 For Kiley Raper, Oklahoma Retail Merchants Association CEO, Oklahoma’s Amazon agreement is the first step in an ongoing effort to close the sales tax loophole and restore competition between brick-and-mortar retailers. Her organization joined many other retail industry groups in calls to federal leaders for passage of Marketplace Fairness legislation, which would have allowed states to collect taxes on all Internet sales.

Currently, Internet retailers with a brick-and-mortar storefront, business office or warehouse in the state must collect sales tax on purchases from Oklahomans. However, under a 1992 Supreme Court ruling that dealt with catalog sales, out-of-state Internet retailers are not required to remit sales tax. It falls upon consumers to report and pay tax from online purchases to the Oklahoma Tax Commission.

South Dakota’s attorney general is petitioning for the Supreme Court to review the 1992 case Quill Corp. v. North Dakota. Retail leaders, including Raper, say there is a likelihood that the Supreme Court will hear this case. In 2015, Supreme Court Justice Anthony Kennedy publicly stated that in the age of online retail, it was time to reconsider the landmark case.

Should the Supreme Court deliver a ruling requiring out-of-state online retailers to collect and remit sales tax, Oklahoma municipalities, as well as the state government, would likely see tax revenues grow, and brick-and-mortar retailers would be on a level playing field with online merchants.

Regardless of any ruling or legislation, consumers have established shopping habits and behaviors. It’s imperative that local retailers continue to push the message of shop local, explained Zodrow.

“It’s a lifestyle change,” Zodrow said. “I know it can be super tricky to shop local all the time, but you can be more conscious. Simple little purchases can make a huge difference to us as retailers.”