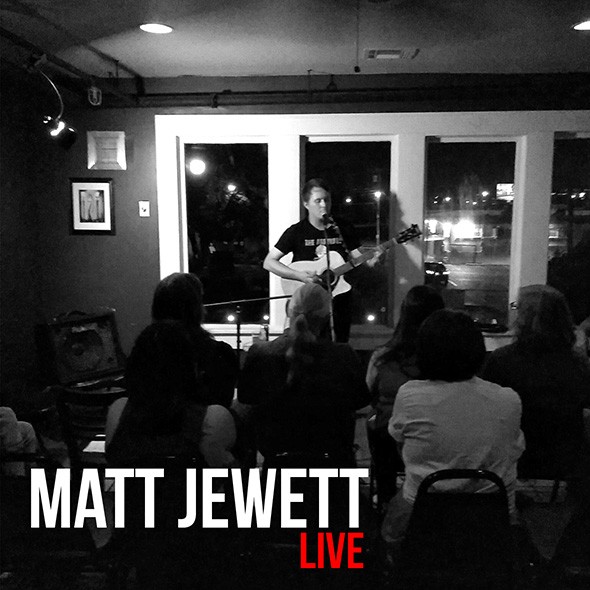 After his “pretty popular kind of like punkish, emo, I don’t know what kind of band”  Shut Up Matt Jewett played its last show in June of 2018, the band’s namesake stopped playing music for several months.

“I was just so burnt out,” Jewett said. “It was almost eight months on the button that I didn’t play any shows. I didn’t touch a guitar for like six months. … I was just kind of spent and done.”

Matt Jewett Live, recorded by James and David Nghiem in May 2019 in the small upstairs Scotch Room at 51st Street Speakeasy, will be released Friday through local record label Robot Saves City. Jewett started playing music again in February 2019 when he opened for Canadian singer-songwriter Seth Anderson at HiLo Club.

“After that show, I started writing a little bit again and went through a flourish where I hit three or four songs pretty quickly in a couple of months,” Jewett said. “I had not had that. I’d been in a real big rut of writer’s block for about a year and a half or two years where I just really hadn’t written anything, or at least anything that I thought was any good.”

“Bad Math,” “It Always Ends the Same” and “Younger Man’s Game” were written in the months before Live’s recording.

The album also includes “Never Look Back,” a cover of a song by Caught Stealing frontman Pete Allen.

“It’s an upbeat party-sounding song with them, but the lyrics are really, really kind of gut-wrenchingly dark, so I just took it and turned it into the most depressing song humanly possible,” Jewett said. “They’ve got the party version, and I’ve got the massive bummer version.”

The song’s transformation is indicative of the way Jewett’s newer songs compare to his work with his former band, as well.

“Anybody who’s ever seen me knows that I can’t just stand still in front of a microphone with a guitar,” Matt Jewett said, “but the stuff is definitely not as fast as it used to be. I sing a lot more than I squelch. A lot of that [Shut Up Matt Jewett] stuff was very sardonic and sarcastic and had a lot of dark humor in it, and this stuff is not funny at all. These songs are kind of OK with just being super fucking depressing.”

Fortunately his newer songs are less autobiographical than some of his earlier material.

“It often sounds like I’m purely writing about like amorous romantic relationships and them maybe not going so well, and I think I kind of just frame a lot of things in the context of that just because it’s a little bit more universally relatable,” Jewett said. “There are a lot of times when I’m saying ‘you,’ and ‘you’ could actually mean ‘me.’ ‘You’ could mean, ‘I’m talking about myself, but for the sake of the story, I’m maybe pointing it outside of myself.’ But also, sometimes, I’ll just take a little chip of something that’s happened and the rest of it is purely fiction. There’s a lot more fictitious-character-writing in my songs than I think a lot of people think.”

The “you” in album closer “Younger Man’s Game,” we’re told, feels “a change coming on.”

“As the angst and rage fades to shame,” Jewett sings, “and you become resigned like the end of the day / Same as it ever was / All that anger was just a younger man’s game.”

Jewett plans to release a “proper studio EP” later this year. Live will be available for purchase at robotsavescity.com, and money from sales will go to Sisu Youth Services, a nonprofit providing shelter and care for homeless youth.