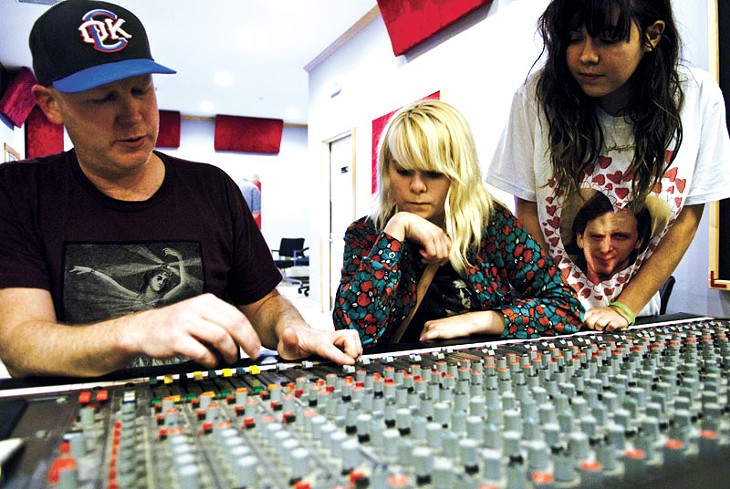 Chris Harris has been recording and producing music for over 15 years. The Depth & Current frontman started a commercial studio in his house in 1999, but by 2008, it was time for a change of venue.

“I had recorded all the bands I know personally — and all their friends that they could vouch for personally,” Harris said. “It got to the point where I had strangers wanting to come in and record, and I just didn’t want to have strangers in my home, so that’s when I started looking for a space.”

For the last couple years, he has run Hook Echo Sound by himself in Norman. Other than the occasional freelancer, Harris has engineered and produced the bands that have come through solely on his own. But that is changing now, thanks to Skating Polly.

The duo, consisting of stepsisters Kelli Mayo and Peyton Bighorse, started their ugly-pop band in 2009 at the respective ages of 9 and 14. Harris actually played an essential role in this process, helping them score their first show and put out their first two records. Five years later, Mayo and Bighorse have become partners in Hook Echo Sound.

“I’ve wanted one of these freelancers who comes through to eventually take over all the recording stuff for me,” Harris said, “but it’s just never really worked out. [Mayo and Bighorse] have an enthusiasm for songs and music that a lot of other people don’t have. I think that has been what’s missing from a lot of the other people I thought might’ve been able to take over some day.”

Skating Polly recorded a large portion of its first album, Taking Over the World, on its own. The techniques they used, however, barely scratched the surface of what the two are capable of, and partnering with Harris is a significant step forward in realizing that potential.

“It was pretty simple,” Mayo said of recording the debut. “It was just like, record a track; stop the track; turn it up if you want.”

As Harris explains, there is a significant difference between engineering and producing.

“The engineer is the one who’s responsible for putting microphones in front of instruments, mixing the sound, handling the gear,” he said.

Anybody can be trained to do these things. Producing, on the other hand, is not so strictly technical, and it requires a skill that not many have.

“What you can’t train is having the taste to hear a sound and say, ‘That is working for this song,’” Harris said.

He is confident that the members of Skating Polly have the taste to succeed as producers.

“[Mayo and Bighorse] have such a way with arrangements and melody and the things that make songs great,” Harris said. “In a couple of years, if you put them in the studio with a young band that was good but didn’t really have any direction, they’re going to be able to end up turning it into really great music.”