Philly Homa, which is accumulating lunchtime lines, gets its bread and steak shipped from Philadelphia.

A commitment to serving Philly cheesesteaks like those found in Philadelphia has led to breakout success for Philly Homa after just a few months in business and has already set the groundwork for expansion.

Owner and operator Charles McEntire founded Heifers & Hens, 2219 W. Interstate 240 Service Road, in 2019 after years of operating three pizza restaurants in Dallas and deciding to move back home to Oklahoma. McEntire opened Heifers & Hens as a burger-focused restaurant but decided to add Phillys to the menu and quickly noticed they were outselling burgers.

“You can go into Chili’s or anywhere and they’ll throw something together on any roll,” McEntire said. “Let’s do it right and see what happens. We did research and watched a lot of videos on Phillys and knew we could do it right in Oklahoma. We were selling more Phillys than burgers [at Heifers & Hens], and that wasn’t what was supposed to happen.”

McEntire sold Heifers & Hens last November and opened Philly Homa at 1165 E. Second St. in Edmond around the same time, putting the emphasis of the restaurant on eight styles of Phillys, hand-battered chicken and housemade dessert highlighted by daily slices of pie and huge cinnamon rolls.

He said that in order to make an authentic Philly cheesesteak, it isn’t as much about the topping (with Whiz or without) as much as it is the bread. His research points to using Amoroso’s hearth-baked rolls that originated in Philadelphia in 1904.

“Anyone you get in from Philly [will ask], ‘Do you use Amoroso?’ You’ve got to use the best,” McEntire said. “It sucks up all the juices and doesn’t fall apart. It’s got a good flavor to it, and it’s just an awesome bread. … You’d be surprised how many people from Philadelphia live in Edmond.”

Philly Homa also gets its steak shipped from Philadelphia and serves its 8-inch ($9), 12-inch ($12) or massive 24-inch ($23) cheesesteaks with double meat (either steak or chicken). It is also committed to providing Cheese Whiz, which is popularized at famous Philadelphia locations Pat’s and Geno’s.

“I didn’t think I’d like the Whiz, but it’s amazing,” McEntire said. “They’ll tell you in Philly that it’s real meat and fake cheese, but it’s really good. Oklahoma is more of a provolone cheese state, but you’ll get more people who venture out. … A lot of people will order provolone on one half and try the Cheese Whiz on the other half.  Cheese Whiz usually wins; once you try it, it is really good.”

The most popular cheesesteak variety is the Southwest Philly (8-inch $11, 12-inch $14, 24-inch $27) with grilled green, yellow and red sweet peppers, mushrooms, jalapeños and a Southwest chipotle ranch sauce. A pizza Philly with pepperoni, pizza sauce, green peppers and choice of cheese and either chicken or steak is also popular, McEntire said, along with a Buffalo chicken version. If you want to limit carb intake, substitute bread with one of three tortilla wraps: regular flour, spinach herb or jalapeño cheddar. 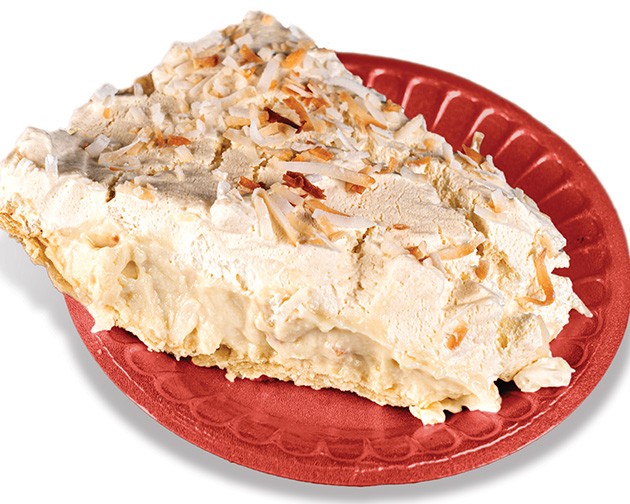 McEntire’s cousin Sharon Jesse joined Philly Homa after the two talked about opening a restaurant together since they were kids. Jesse handles dessert duties each morning, making pies, cheesecake and cinnamon rolls.

“I use my great-grandmother’s recipe for the crust,” Jesse said. “I’ve just never found another one like it. It’s got vinegar, which nobody puts in the crust anymore. It makes a better product.”

Pies ($3 per slice) like coconut cream, which has been one of the most popular, use her great-grandmother’s crust while others like Oreo cream have a crushed cookie or graham cracker crust.

“I think it’s great and it’s been fun,” she said. “It’s really enjoyable when people say they like the food.”

McEntire said they sell multiple pans of 24 cinnamon rolls each per day, not including ones he eats.

“They say cinnamon is good for me,” he said of its anti-inflammatory properties in a tounge-in-cheek manner. “So we put double cinnamon in them and I eat three or four per week.” 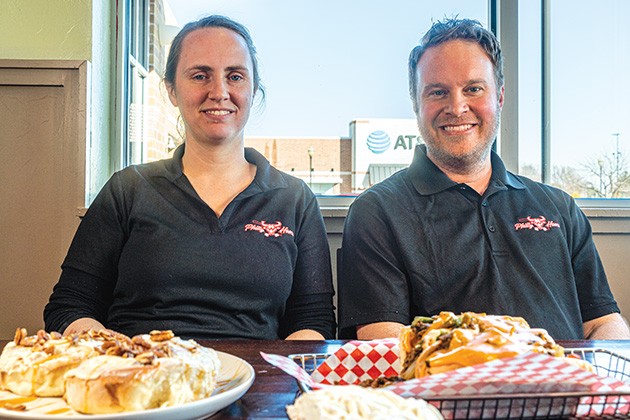 The commitment to offering a high quality product has led to loyal customers and lunchtime lines out the door. McEntire said one Philly native dines at the restaurant three times per week. He said other customers routinely drive from Moore and Norman, while another couple drove all the way from Weatherford just to have Phillys.

“A guy was sitting here and said, ‘This brings me back home,’” McEntire said. “‘I’m from Philadelphia and this brings me back to my childhood.’ We get that all the time. It’s good that we can bring them back home, and we’ll never waiver. It’ means a lot to get those compliments. We’ll continue to do them right.”

He said the Oklahoma City metro market was devoid of a good Philly cheesesteak offering besides Texadelphia, 200 S. Oklahoma Ave, Suite 110, and Hobby’s Hoagies (two locations).  The void Philly Homa is helping fill is striking a chord with customers, as the restaurant sold over 2,600 cheesesteaks in January and has already signed up for a new, larger location at Meridian Avenue and Memorial Road next to the Pei Wei and across from Mercy Hospital.

The second Philly Homa location will open later in 2020 and use the extra space to continue to offer authentic cheesesteaks but also build off McEntire’s pizza roots with a twist. He said outside The Heat Pizza, 1319 S. Broadway Ave., in Edmond, there isn’t a pizza restaurant offering Chicago-style deep dish.

“It will be two locations in one, still called Philly Homa,” he said of the new location. “Going to have Chicago deep dish. Going to have New York-style too, but we’re going to push the deep dish because there really isn’t a lot of it in Oklahoma.”