Chef Corey Harris never dreamed of owning a restaurant. Even so, Off the Hook Seafood & More is a hit

During and after high school, Corey Harris worked a series of dead-end jobs. Slinging fast food through the drive-thru wasn’t going to cut it, so he enrolled at Platt College and got a culinary degree.

But he never thought he would have his own restaurant.

While working at the Chesapeake Energy Arena (née Ford Center), he was approached by a former Thunder player about starting a food truck. Before it got off the ground, the player was traded, but Harris and his wife Loniesha decided to press on.

Their truck, Off The Hook Seafood & More, was a hit — they finally had to get their own building, 125 W. Britton Road.

“To be honest, this wasn’t my dream,” he said. “We were content with the truck, but we were forced by our customers to open the restaurant. We heard it so much, we thought, ‘Maybe we should.’”

Loniesha has the mind for business and proudly wears a T-shirt that reads “Boss Lady” on the back. Corey knows the food, which he picked up from his mother and grandfather and sharpened during stints at the Skirvin, Remington Park and the Ford Center.

The menu is Cajun-inspired, even though Harris has only been to Louisiana once in his life.

“A lot of people ask if we’re from Louisiana,” he said. “I tell them our food is a little bit Cajun and a whole lot of amazing.” 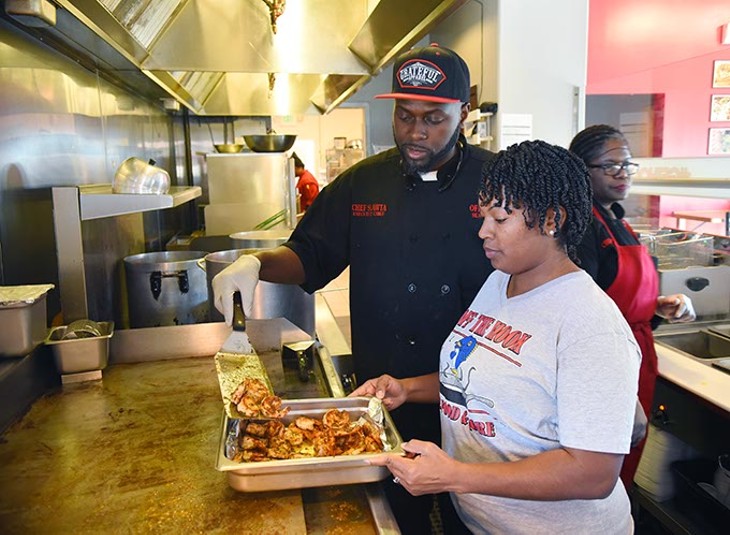 Off the Hook’s top seller came about by chance. After a catering job, Harris decided to dip some french fries in a leftover lobster cream sauce. It was pretty good, he said. So he added bacon, and then Sriracha, and then blackened shrimp.

“People thought it was stoner food,” he said.

But if that was their initial impression, it soon turned to hunger.

When they went to an event without the smothered seafood fries on the menu, it was all people wanted, Loniesha said. Now they make a giant stockpot of lobster cream sauce for their busiest days, and it’s still not enough.

Seafood is front and center on the menu, though there are other options for people who aren’t comfortable with food that swam. And as the weather turns cold, the restaurant will bump up production of its gumbo and rotate in chilis and chowders as its soups du jour.

And since Off The Hook lives in the bones of a long-gone Starbucks, it has a drive-thru for customers who don’t want to face the weather. But Harris said he isn’t back to making fast food.

“We make it fresh to order, so sometimes there will be a wait,” he said.

Diners can try calling ahead, but when it gets too busy inside the restaurant, answering the phone is the first casualty.

One taste of the food, though, and all worries about waiting quickly vanish. The grilled fish, shrimp and grits is a revelation. Creamy, perfectly seasoned grits are the base for delicate blackened fish and jumbo shrimp with spinach lobster cream sauce over the top.

The restaurant smells of fresh garlic frying in butter and aromatic spices, but the air is filled with conversation as the lunch crowd rolls in, eager for fried catfish, po-boys and the Melted Lobster sandwich.

In the back, Harris and crew are busy cooking as the line grows longer. It might not have been his dream, but he’s living it all the same. 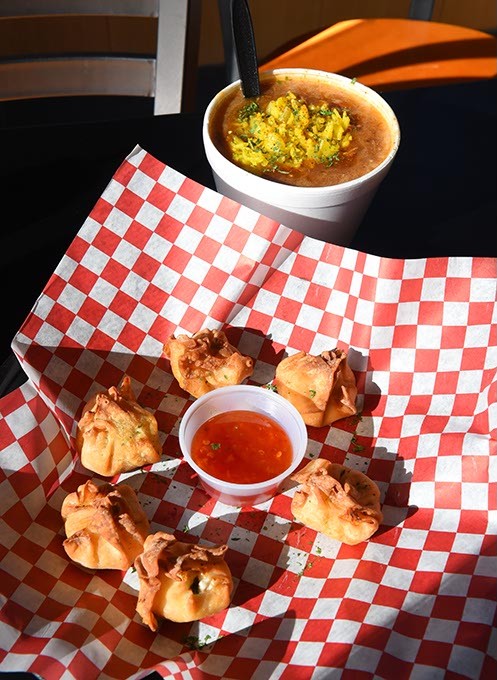 Print headline: Hook learnin’, Chef Corey Harris never dreamed of owning a restaurant, but Off the Hook Seafood & More is a hit all the same.