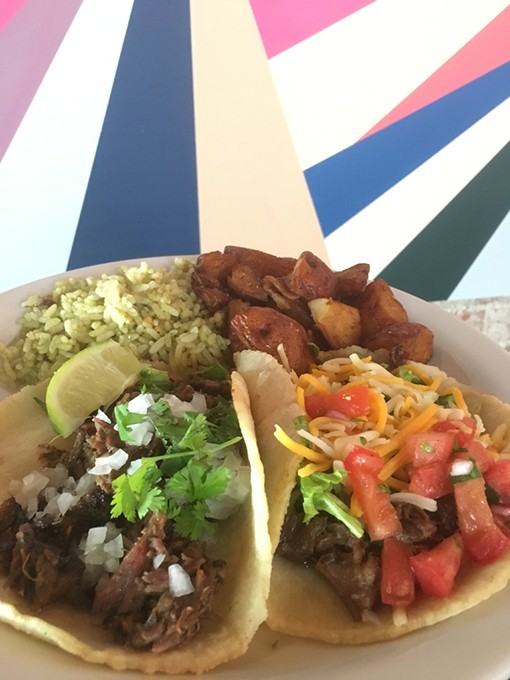 Iguana Mexican Grill has been a serving Tex-Mex in Oklahoma City since opening at its original Western Avenue location from 1999 to 2004 as Iguana Lounge before opening in Automobile Alley, 9 NW Ninth St., in 2008 under its current name.

Born in New Braunfels, Texas, Dunham grew up in the South Texas tradition of Tex-Mex flavors. Mix in a Culinary Institute of America education and a professional career that has included fine dining restaurants in New York and leading the School of Culinary Arts at Francis Tuttle Technology Center.Dunham worked with Igauna’s longtime chef de cuisine Juan Quixtan to streamline its menu.

“This restaurant over the past nine or 10 years has become a version of Tex-Mex, and having grown up in Texas and spending my whole life around that food, we decided to is to refocus on the flavors of northern Mexico and southern Texas,” Dunham said.

The changes to the menu weren’t dramatic. Dunham takes pride in the little things, like making chile con carne from scratch and making corn tortillas in-house. All of its ingredients are prepared in-house except flour tortillas, which are shipped in fresh every day from a local factory. Dunham said they will begin making flour tortillas in-house this year, as soon as they carve out kitchen space for the equipment.

“We’ve have had nothing but positive [reactions] to the renovation of the space and the food,” Dunham said. “Really, the menu changes were less about an overhaul and more about pulling back and refocusing on what we thought we did well. We only have two canned products, and one of the them are chipotles in adobo sauce, which [the sauce] is an important ingredient [by itself].”

"You can taste the love from La La in each bite of the tamale." tweet this

I’ve been a fan of Dunham’s thoughtful and nuanced style of cooking since first trying Nashbird, 1 NW Ninth St., not long after it opened last fall, but somehow, I had yet to try Iguana, and I will have been in Oklahoma City a year in mid-June.

I think part of my reticence had to do with a perceived lack of parking in the area, but when I went for my first visit, I was surprised to see that Iguana has its own parking lot and ample parking available. I’ve been kicking myself that I didn’t try Iguana sooner because it’s an excellent take on Tex-Mex, fueled by Dunham’s institutional knowledge, Quixtan’s experience and a little bit of love by a woman the kitchen staff lovingly calls “La La.” 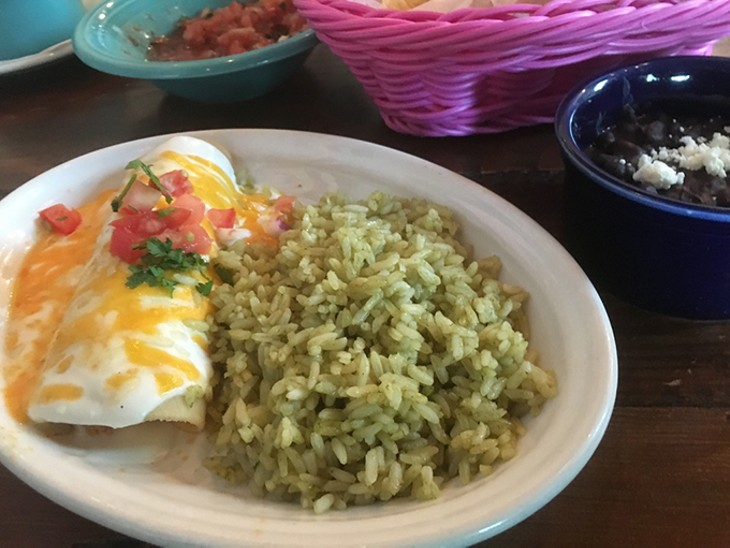 Tamales are anecdotally one of the most labor-intensive menu items to make, regardless of cuisine, and La La turns Iguana’s fresh tamales out every day, with a spoon of in-house made masa in one hand and a soaked and freshly pliable corn husk in another.

The tamale dinner ($11.99) is served with two sides and a generous portion of salsa verde. You can taste the love from La La in each bite of the tamale that gets a boost from what I dare say is the best salsa verde in the city. The roasted peppers come through in the final sauce, and it was the perfect complement to its slow-roasted pork center.

Guests get a choice of two sides with each entrée, and over the course of two meals, I sampled the black beans, pinto beans, red rice, green rice and roasted potatoes. I generally choose pinto over black beans, but Iguana’s refried black beans get a slight nod over the whole pinto variety in a photo finish, but the green rice edges the red variety in a landside.

It’s a simple preparation on the rice — tomatillos and cilantro are blended into chicken stock — but I liked the lingering herbaceousness compared to the red’s chilie-centered flavor.

On my second trip, I substituted roasted potatoes for beans and was really pleased with the result. The potatoes are evenly crispy, and some of my favorite bites of the meal were dipping them into leftover tableside queso, a side item that benefitted from a few dollops of the complimentary pico de gallo.

I had to try Iguana’s fresh corn tortillas, and the beef barbacoa tacos called my name. I was able to convince my server to place the order to try each taco preparation: Tex-Mex (lettuce, cheese and pico) and street style (corn tortillas with cilantro, lime and onion).

The barbacoa is a standout. While other preparations are more like pot roast, Iguana’s variety melts in your mouth, and it’s because they’re using beef cheek, in true south Texas style.

“In south Texas, that dish is traditionally made with the head of a cow,” Dunham said.  “Northern Mexico and south Texas is all ranching land, so if you go to Oaxaca and get barbacoa, it will be goat just because that’s what is available because of the mountainous region. In south Texas, you would do it in an underground pit, but the health department won’t allow us to dig an underground pit outside. We slow-roast it in the oven after rubbing in a special blend of chilies.”

I preferred the street taco preparation for the barbacoa. It’s such a luscious ingredient that the lettuce and cheese only got in the way. The cilantro, onion and lime provided an acidic way to cut through the fat.

I also tried a pair of enchiladas topped with Iguana’s sour cream sauce — the chicken variety and a vegetarian take with spinach and mushrooms.

The vegetarian variety was well made and showcased the fresh corn tortilla, but the filling would’ve benefitted from some of the sour cream sauce in the interior of the enchilada.

“Ironically, I tasted it last week and I told Juan that I wanted to consider reworking that dish, so it’s kind of funny you said that, the timing of it,” Dunham said.

The chicken is excellent — cooked in a guisado preparation, it is stewed in its own chicken stock and reintroduced after being shredded for a perfectly tender bite that I surprisingly liked more than the pork in the tamale.

If you’ve been to a previous iteration of Iguana and haven’t revisited since Dunham took over, it’s well worth the trip, especially for the barbacoa made from beef cheek and tamales by La La.

What works:Barbacoa made with beef cheek melts in your mouth.