As she studied submissions for Cherokee Heritage Center’s 21st annual Cherokee Homecoming Art Show & Sale in Park Hill near Tahlequah, curator Callie Chunestudy found total confirmation of her beliefs about current Native American artwork — that there is nothing unilateral about it in 2016, if there ever was.

“A lot of people, when they think of a Native art show, they’re going to come and see pictures of Indians doing Indian things,” Chunestudy said. “But we have a lot of contemporary artists who have begun to enter — young artists and people working in a contemporary vein.” 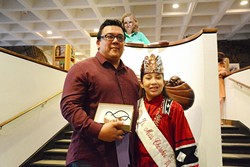 The grand-prize winner, announced Aug. 26, defied expectations. A small pen-and-ink work by first-time entrant Michael Mounce, Music With Papa depicts a girl sitting astride a bear and attracting a swarm of butterflies as she plays a recorder. While there were plenty of larger and more dramatic works, Chunestudy said that Mounce’s emotional and intricate creation resonated with the jury.

On display through Sept. 27 at Cherokee Heritage Center, located on the grounds of the original Cherokee Female Seminary, the Homecoming Art Show includes works by artists from the Cherokee Nation, United Keetoowah Band of Cherokee Indians and the Eastern Band of Cherokee Indians, casting a wide net across the Cherokee community. Show highlights include works by bow maker Noel Grayson, ceramicist Troy Jackson, master potter and ceramicist Bill Glass Jr. and his metallurgist son, Demos Glass, and painter Clesta Martin-Manley. 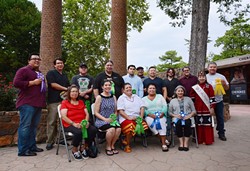 Cherokee Heritage Center also is home to the Cherokee National Archives, the Cherokee Nation’s largest collection of historic documents and artifacts dating back to the 18th century, and it’s located at what the National Park Service designated as the western end point for the Trail of Tears forced migration in the early 1800s. The Homecoming show began in 1996 as a way to bring focus to the skill and diversity of Cherokee visual art.

“When it started, it was designed to help feature and promote our Cherokee artists — artists who might otherwise not get recognition — and bring attention to Cherokee culture through art,” Chunestudy said. “We’ve had 116 pieces accepted from 68 Cherokee artists, and we have some amazing, seasoned artists this year.”

More than $15,000 in prize money, donated by Cherokee Nation businesses, was distributed to 30 winning artists, with categories split into traditional and contemporary sections.

“While we do have traditional categories in this show, which are always the love of any Native art lover, we have some incredible contemporary work,” Chunestudy said. “It’s moving into the future.”