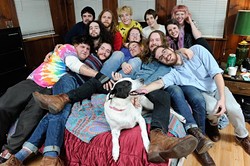 “Mostly, I feel like it’s just a straight pop thing,” Buchanan said of Cherry Death’s sound. “The songs, I feel like, are mostly pop songs.”

Before the end of Glow God, Buchanan began work on a side project with drummer Atlee Hickerson and bassist/vocalist Lacey Tackett called Dream Bend. They played a few shows together and recorded a single at Dust House, but over time, that idea morphed and grew into family affair Cherry Death.

Buchanan said he had a “vague idealistic change” following Glow God and began writing a lot of songs.

The first Cherry Death record, 2014’s Brain into Blue Skies, was almost entirely a solo effort from Buchanan. One day, he said, he was just recording a couple of songs and realized he had a group of tracks he liked, so he just decided to put it out.

“I just stumbled into it being what it is, and I’ve continued to stumble since then,” he said.

Buchanan joined his first band in junior high. Since then, music has been what he does, what he cares about.

“Especially the last seven or eight years now, it’s been the main focus; trying to tour a lot and actually putting out records and making things,” he said.

It takes time, Buchanan said, for anyone to understand what it is you do and how you do it, music or otherwise.

Growing up around Baptist churches, he saw his grandpa on one side of the family singing in the choir and his grandma from the other side playing piano. There was no one in his family who was specifically a musician, but Buchanan always felt welcomed and supported in his own pursuits, growing up around the gospel hymns and seeing what music meant to other people in his family.

He especially remembers a music teacher at Soldier Creek Elementary School in Midwest City who helped foster his musical spark.

“It just seemed like he really cared about it,” he said. “When you’re able to hear something and it makes you feel some way, but then you see someone else that’s doing it and it obviously makes them feel some way, it’s like little guidelines that point you in the right direction.”

Cherry Death has no official roster. Aside from Buchanan, Hickerson, Tackett and guitarist Kilyn Massey, the band uses a rotation of many other members within Buchanan’s circle of friends, depending on show needs and member availability.

For Buchanan, Cherry Death is a much more intimate venture than Glow God, a band in which the brain trust was divided up more evenly among the band’s members. Writing for this project, in many ways, has been therapeutic for Buchanan.

“It’s just me writing for the most part [with Cherry Death], so I guess just by default, I forced myself into doing something more personal,” he said.

Buchanan said his songwriting process tends to change as often as the makeup of the band. The two full-length Cherry Death projects were written sitting down with his guitar at his computer, usually on a whim or whenever the mood struck him.

However, the songs on the two single releases were ideas Buchanan said he had before he even wrote them down.

“Instead of being part-by-part or piece-by-piece, I just had a song pop into my head, which is a bit more rare, so it’s kind of slowed down a little bit, but it’s all right with me,” he said.

Buchanan tries to let his songwriting come across as naturally as possible. The point, he said, is not to put too much thought into it. If you play too much of an active role in the process, if you try to force something, you’ll be messing with the product.

“It’s not possible to do anything wrong with music if you’re acting through nature rather than letting your or anyone else’s ego get in the way to form whatever it is,” he said.

Above all, the songwriter said simply interacting with others provides him with creative fuel.

“That’s kind of why I make it a point to play with so many different people,” he said. “Growing up, I was in more bands at the same time, so I learned to draw inspiration from all these different people constantly.”

Buchanan said Cherry Death should start work on another project soon. He said the band has as many as 50 demos prepared for a future record.

Everything Is Not OK 2