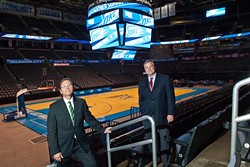 In an era of billion-dollar arenas that serve as palaces to America’s basketball teams, Oklahoma City’s Chesapeake Energy Arena came at a bargain price.

Add up the original construction cost along with the price of renovations throughout its 12-year existence, and the arena’s $185 million price tag makes it one of the cheapest in the nation, especially when compared to other facilities that are home to professional sports teams.

Building an arena for less than $200 million would have been considered hard to do in the 1990s, let alone by today’s standards. Kansas City’s Sprint Center, which isn’t home to any professional team, cost nearly $300 million when it was built in 2007. Toronto’s Air Canada Centre cost $265 million in 1999, and the new home of the Brooklyn Nets, Barclays Center, opened a few years ago at over $1 billion.

“It was a bargain,” Thomas Anderson, executive manager of special projects for the city of Oklahoma City, said of Chesapeake Energy Arena.

Thomas has overseen a series of renovations made to the arena — new suites, scoreboards, restaurants and a grand lobby entrance — over the past several years. Chesapeake Energy Arena was built at a cost of $90 million in 2002, $33 million less than Madison Square Garden in New York, which opened in 1968.

Then again, arena costs have varied over the years and are often dependent on many factors, including location and size.

The city built a basic arena in 2002 and then gained voter approval to use sales tax dollars to complete a series of renovations in an effort to modernize the facility to meet current NBA standards. That included several upgrades, such as replacement of the seats closest to the court.

“They were probably the least comfortable seats in the building, and that was where people paying the highest amount for a ticket were sitting for concerts and Thunder games,” Anderson said. “We totally re-did those to what you would expect at that price point for concerts and games.”

Other upgrades included a complete remodel of the restrooms.

“We went from high school to the Hyatt,” Anderson said. 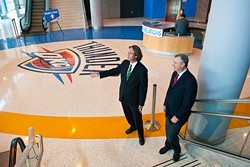 Besides the fact that Chesapeake Energy Arena, which was called Ford Center when it first opened, was built in Oklahoma, where construction costs can be considerably lower than other regions, a penny-pinching mentality helped the city build a low-cost arena.

The $90 million bid for original construction ended up being too low, although the construction crew honored the original price. When renovations were started following news of a new NBA team, a tanking economy in 2008 brought in nearly $20 million less than originally projected through a voter- approved sales tax for the improvements.

“We had to really ask, ‘What’s really essential, and what stuff can we cut?’” Anderson said.

Expansion of the concourse was cut by 10 percent, a practice court was removed from the plans and five levels of concession and office space was redesigned to fit on four floors. The renovation process also took six years instead of the planned three.

Arena officials have been creative in how they make improvements. For example, a third-level concrete floor was ground down and given a topping that looks like the popular terrazzo floor material, but at a fraction of the cost.

The arena’s lower cost also comes from its size, which not only offered savings but also might create a better fan environment. At 581,000 square feet, Chesapeake Energy Arena has one of the smallest footprints of any modern arena. Arenas in Memphis, Houston and Orlando are all over 800,000 square feet.

“American Airlines Center is an amazing facility,” Anderson said about the Dallas arena that is 840,000 square feet. “But one of the things we have over them is the sightlines are better here. You are so much closer to the action here.”

The ’Peake, as the arena is often called, has 5,000 more seats than the Cox Convention Center arena across the street. However, the last row at Chesapeake Energy Arena is only eight feet farther from the center of the court than the last row at Cox.

Despite the cuts, arena officials say they have an arena that plays well against any in the league.

“It’s probably the best value arena I know of anywhere,” said Tim Linville, the arena’s director of marketing. “They built a really functional arena that was barebones. But once we brought the NBA in, we were almost able to go in and put in all the things you wanted before but couldn’t afford.”

The future of arenas

Linville said arena staff is constantly looking for ways to improve the fan experience and features are added each year. When asked what the future holds, Linville says he isn’t sure, but he points to a smartphone as a possible answer.

“Technology has really changed things for us, and it’s about making sure people can stay connected,” Linville said.

Many architects view in-arena technology as the future, and arena managers say fans will see better connectivity with stats, replays and

other features. Part of the challenge for stadiums and arenas is convincing people the experience at the game is better than the one at home with their giant TV and close-up camera angles and replays.

In OKC, that hasn’t been a problem, as consistent sellout crowds turn up to watch one of the league’s elite teams. The

Thunder ranked No. 11 in attendance last year, but it was 100 percent full throughout the season.

“We are really proud of the arena,” Linville said. “It gets high marks from those who visit, and it just shows how smart they were when they built it.”

Print headline: Dollars and sense / Chesapeake Arena construction and renovation costs are a bargain compared to other arenas around the nation.