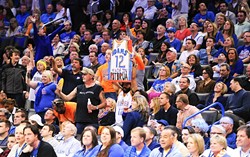 The first matchup of the weekend is the seventh-seeded Oregon State Beavers versus the 10th-seeded Virginia Commonwealth University Rams at 12:30 p.m.

The VCU Rams storm into Oklahoma City with a share of the Atlantic 10 regular season title and runner-up to the conference tournament title. The Beavers finished in the middle of a talented Pac-12 Conference.

If any game looks prime for an upset this weekend, it's this one. Momentum looks to be in VCU’s favor. Forward Tres Tinkle, Oregon State’s second leading scorer, is likely out with a right foot injury. In the season, Oregon State averages 72.1 points a game against an allowed 70. There is no room for error.

The No. 2-seeded Oklahoma Sooners will play what is basically a home game against the 15th-seeded Roadrunners of Cal State Bakersfield at 3 p.m.

The Sooners finished third in the heated and parity-laden Big 12 and were led by two-time conference player of the year Buddy Hield. The senior shooting guard is one of four starters to average double-digit points along with guards Isaiah Cousins and Jordan Woodard and forward Ryan Spangler.

The Roadrunners are hot. The Western Athletic Conference tournament champs have won 9 of their last 10 games, including a buzzer beater stamping their first invite to the big tournament.

Turnovers are the name of the Roadrunners’ game in both positive and negative ways. They create 15.3 turnovers a game along with 8.0 steals and 5.1 blocks. However, their offense suffers from the turnover bug, counteracting their defense.

The third match of the evening, starting at 6:20 p.m., sees the third-seeded Texas A&M Aggies against the 14th-seeded Green Bay Phoenix.

The Aggies surprised the Southeastern Conference by taking the regular season championship and runner-up in the conference tournament. Making its first big dance appearance since 2011, Billy Kennedy’s team looks to make noise and anything less than an Elite Eight appearance might be interpreted as a disappointment.

Green Bay is not supposed to be here. The Phoenix upset Wright State University to win the Horizon League tournament championship. It hopes to take that momentum into Oklahoma City and catch Chesapeake Energy Arena, 100 W. Reno Ave., by surprise.

The final opening round game in Oklahoma City has the No. 6 seed Texas Longhorns versus No. 11 seed Northern Iowa Panthers at 8:50 p.m.

The Longhorns put together a solid season under first-year coach Shaka Smart. Texas beat Iowa State, West Virginia and University of North Carolina. For the most part, they won and lost the games they should have and were thoroughly solid.

Northern Iowa is a bit of a head-scratcher. Which Panthers team will we see Friday night — the one that also posted wins over UNC and Iowa State, or the team that lost six of seven in January? What about the team that has won 11 of the last 12? We will find out Friday night.