What works:The mild sauce is sweet, spicy and totally unique. It works with chicken and seafood.
What needs work: The streamlined menu means everything is expertly cooked.
Tip: Call ahead for orders to cut down on wait time.

The city of Buffalo might have popularized the chicken wing in American culture, but Chicago has a unique preparation of wings that includes its own variation of what is simply known as mild sauce that is prominent on the city’s south and west sides.

The mild sauce, which is reported by Chicago Tribune to be a blend of barbecue sauce, ketchup and hot sauce, received a tribute from native son comedian Hannibal Buress.

“If serenity had a flavor, it would taste like mild sauce. It should have Sriracha levels of fame,” Buress wrote for Chicago Magazine in 2017.

The Oklahoma City area got its answer to Chicago-style wings and mild sauce with the opening of Tez Wingz in June 2016 at 3801 N. Oak Grove Drive off NE 10th Street in Midwest City.

With a streamlined menu that serves wings, fries, catfish and shrimp, Tez Wingz has quickly gained a huge following. Every time I’ve gone to the restaurant — usually only a few minutes after it has opened at noon — it’s already packed full of people ordering and picking up takeout.

Wings are finished with a lemon pepper-style seasoning, and the customer adds regular or spicy versions of the mild sauce after ordering.

“Tez Wingz is special,” said Apollo Woods, founder of OKC Black Eats. “It’s my first introduction to Chicago-style wings, and I was hooked. I don’t know what [owner Will Jordan] puts on the wings, but it’s like a magical sparkle that’s so addictive. I tried to wait until I got home to eat my food, but that was impossible.”

William Jordan arrived at Tinker Air Force Base not long after joining the Air Force, which included deployment in Dubai and United Arab Emirates (UAE). His vision for Tez Wings began during the most difficult period of his life.

In 2014, Jordan was driving through Missouri on his way to Chicago for his grandmother Corretta Jordan’s funeral. While on the road, he said that his car, which also carried his pregnant wife, began being harassed by a semi-truck and he feared being run off the road. 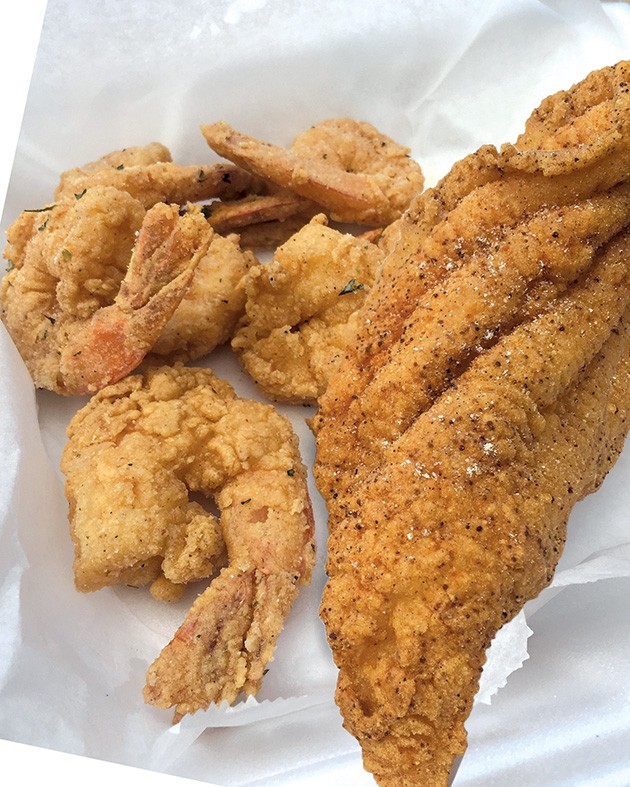 “I had my handgun, and I fired a warning shot and another one to protect my wife and son,” he said.

The second shot went into the truck but didn’t hit its driver. Jordan was pulled over and had guns drawn on him while he was arrested and charged with first-degree assault among other charges.

“I never made it to my grandmother’s funeral, and I was in disbelief that it was happening,” he said.

His case’s jurisdiction was eventually adjudicated through the Air Force, first by an Administrative Discharge Board in 2015 and then a general court martial in front of a jury in 2016. The jury deliberated for 15 minutes and acquitted him of charges.

He signed a lease for Tez Wingz, which he opened in a former 7-Eleven space, after the board hearing in 2015 but was surprised to be brought before the court martial just two months after opening the restaurant.

“I’m still getting treatment for the whole incident,” he said. “I withdraw from a lot of things. They took the fun out of a lot of life. For you to cross that line [and think I was going to jail] and then say, ‘Go back to real life,’ I don’t know how to do that.”

He got out of the military and went to school and put the same seven-day-a-week energy that he used in the military into his restaurant. It has helped develop a restaurant that is well run with friendly service, serving recipes by his mother Rosetta.

The youngest of 10 children, Jordan started to learn to cook when he was in the second grade, following his mother’s recipe. While mild sauce is a staple with all types of variations in Chicago’s south and west sides, Rosetta Jordan said her own recipe was born out of trying to stretch ingredients to feed all 10 of her kids.

“It was created from my love for my children and them wanting to have enough,” Rosetta Jordan said by phone from Chicago, where she is a bus driver for the city. “When holidays comes and everyone has barbecues, you want everyone to have enough meat and enough sauce to go around. We were blessed that when I cooked a meal, it seemed to be sufficient so that nothing was left and the kids enjoyed it. I enjoyed serving my family. The main ingredient is the love and wanting to spread it.”

Tez Wingz is named after Will Jordan’s older brother Martez Lewis Jordan, who died in 2010.

“[Martez] is the only one in the family that loved chicken as much as me,” he said.  “He’d come to the house late at night and throw some chicken in the sink and end up waking up the whole house because he had to have some of mom’s chicken.”

Will Jordan uses his mom’s recipe as a base for the restaurant. Despite using barbecue sauce as a base, it has a thin consistency and has a spicy and sweet flavor that is totally unique.

Every anniversary for the restaurant, Jordan has added one new item. I stopped by recently to try the chicken, catfish and shrimp. The restaurant provides tartar and cocktail sauces for the seafood, but I used the mild sauce. My favorite bites were dunking the shrimp in the sauce and making a sandwich with the white bread, tartar and mild sauce with the catfish. Everything is prepared to-order, by hand.

I normally don’t like breaded wings because the coating is either too crumbly or detaches from the meat completely. The coating on the wing is light, and the lemon pepper seasoning is addictive.

Jordan wants to keep the menu small at Tez Wingz in order to keep the quality high for the staff that includes family members and Matthew Freund, a friend from the Air Force.

“It’s coming from the heart. Everyone comes in asking for things,” he said. “I don’t have flavors [of wings]; I’m sorry. This is something I love and grew up on. I just want something to be simple and do it myself. It’s OK if a person doesn’t want wings, but a majority of people do.”

Jordan will eventually add rib tips and possibly steak to the menu, and I look forward to watching it grow. It has added a food truck for private catering, which includes trips to feed the University of Oklahoma football team, but Jordan is currently turning down offers to open more locations. He plans to eventually create a more relaxed setting for Tez Wings with televisions and places to lounge.

“I want to be a father and a husband, be at parent-teacher conferences,” he said. “I don’t want to be the guy who is always at work. There’s no amount of money that can get me to change that.”