There’s no story without their roots. 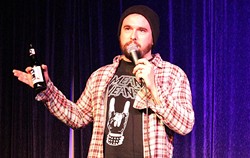 Ryan Croft doesn’t want to be douchey. And the idea he wants to apply to an upcoming road trip comedy tour might be overused. In the end, he doesn’t care.

“The term gets thrown around a lot, and usually, it’s full of shit,” he said. “Whatever. We are definitely low-budget DIY.”

Croft, an Oklahoman turned Chicagoan, and three other windy city comedians are loading up his ’05 Saturn Ion with family-sized jars of peanut butter and jelly, bread and clothes and hitting the long, winding road for a comedy tour that passes through Othello’s in Norman on Friday.

“The name of the tour is Creatures of the Night,” Croft said. “Because why the hell not.” 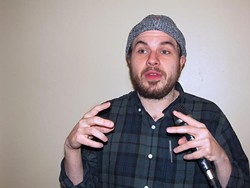 For Croft and Lowrey, who left the Oklahoma comedy scene nearly a year ago, this is a homecoming.

“I’m pretty excited to come back home and do comedy for some old friends,” Lowrey said. “It’s also been a while since I’ve woken up shirtless and hung over on my parent’s couch, so that will also be a real treat.”

The two grew up on opposite ends of the metro, Croft in Edmond and Oklahoma City and Lowrey in Norman, but because of the tightly knit community here, they were bound to cross.

“We’ve known each other for years and only recently realized it,” Croft said. “We became comedy buddies at Othello’s, and he finally stalked me all the way to Illinois, where I caved in to being the much-needed older brother figure in his life.”

Lowrey sees it the same way.

“We vaguely knew each other in Norman,” he said. “Now, we look and sound a lot alike, so people mistake him for my ex-con brother.”

Lowrey’s start in comedy was fluid and nonchalant. He just started going to open mics and performing. It wasn’t such an easy process for Croft.

“I would watch these local comedians — James Nghiem, Ryan Drake — and you should include them so they know I name-dropped them,” Croft said. “I’d watch these longer sets I had never seen someone in my peer group do, and it was genius. But I had no idea how to write a comedy set.”

Schooled in journalism at the University of Central Oklahoma, Croft was familiar with narratives. He had written sketches and done improv. Whether fiction, nonfiction or half fiction, sharing information that interested him was what he did. But his personal breakthrough, the moment he realized he could write a comedy set with ease, didn’t come in any familiar form. It came in the form of a eulogy.

A close friend had committed suicide, and Croft wanted to give him the proper send-off.

“He was a really good friend, but I was trying to write, and all I could think about were jokes that he would like,” Croft said.

When the eulogy was finished, Croft was wary; he didn’t think it was quite the right feel. He read it to another friend, who encouraged him. Croft decided that what he had on his hands was a comedy sketch. It was a bit macabre, he said, but it was a comedy routine nonetheless.

“I [performed] it a few times and realized more than being about breaking into comedy, [the jokes] were really cathartic,” Croft said. “But after I had broken the code, I was like, this is how you write. I just have to write from what I’m thinking and work that into something that’s going to make people laugh. That’s why my comedy stayed personal.”

Croft’s material centers around stories of the sad-sack variety, he said. He likes building his narratives, roping in a few one-liners and characters but leaving the bulk of his impact to the story, which usually involves him getting hurt in some way.

He isn’t sure if it’s a curse, but there’s plenty of that material. Whether it’s getting hit by a car at the age of 7, falling through a roof or the time a cleated soccer player fractured his sternum, he has innumerable tales of pain to recount.

“Storytelling is great if you can figure out how to do it effectively,” Lowrey said. “That’s definitely where he’s headed.”

While both comedians continue to refine their material, they acknowledged they’re playing to very different scenes. Obviously, Chicago is bigger, offering seven or eight open mics a night compared to OKC’s two or three, they said, but the variety of communities is what sticks out.

While they’re happy figuring out the scene, Croft and Lowrey are also impressed by Oklahoma comedy’s growth.

“I’m psyched what dudes like Zach Smith, Ryan Drake, James Nghiem and others are doing for the OKC scene,” Lowrey said. “It’s cool that they’re all so dedicated to building their [city]. Hats off for sure.”

Creatures of the Night