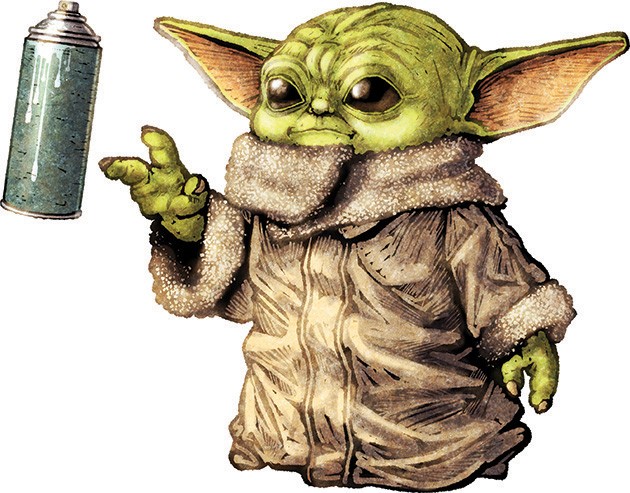 If 2019 had a breakout star, it was almost certainly The Mandalorian’s Baby Yoda. The unofficial star of Disney+’s new Star Wars spinoff, Baby Yoda instantly captured the hearts of millions with its cuteness. It quickly went on to become a meme of its own, and people went as far as to say they would die for it, which is totally sensible. Baby Yoda would have been a shoo-in for Time’s Person of the Year if, you know, it was a person.

But thanks to a creative artist, Disney+ isn’t the only place to see the green sensation. Brent Greenwood, a mural artist and Chickasaw Nation fine arts director, saw the opportunity to capitalize on the hype and get people engaged with local art in one fell swoop. So he spent around two hours one weekend spray-painting a mural of Baby Yoda with colors streaming out of its fingers to promote the arts in downtown Ada.

“I just wanted to paint this little guy because I felt like doing it and thought it would be nice to engage the public with public art,” Greenwood told KXII. “Sometimes students don’t get an outlet to create art, but if they can wake up every day, go to it or from school, or wherever. If they see it in a public setting, at least it’s there, a part of the community environment.”

Greenwood was right; people have already searched for the mural just to get a photo with Baby Yoda, which is probably the best thing to come out of 2019. He said he plans to add more the mural and connect it to another mural painted by Chickasaw Nation Arts Academy students. We’re excited to see what Greenwood does next, but it’ll definitely be hard to top Baby Yoda.