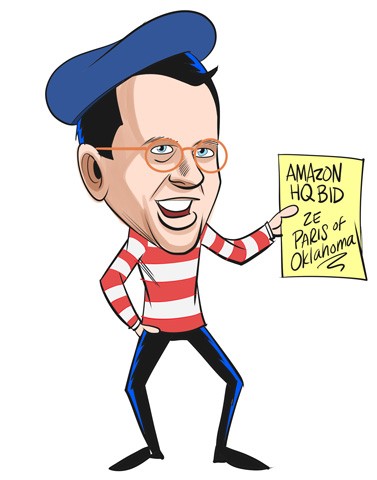 Amazon’s search for a North American city to build its second headquarters campus, which is expected to be over 8 million square feet and result in a capital investment of more than $5 billion, is one of the top business stories of 2017. As expected, many cities submitted their proposals for HQ2, including Tulsa.

What did Tulsa’s municipal leaders propose to Amazon to lure the company to the “Paris of Oklahoma”?

If  anyone files an open records request with the City of Tulsa for a copy of the proposal, city staff will forward the request to the Tulsa Regional Chamber. Since the chamber is a private, nonprofit organization, it’s not subject to state open records laws. It’s highly likely the request will be denied. That was the experience of Tulsa World. The newspaper published an article highlighting that leaders plan to keep a tight lid on a proposal that could ultimately land Amazon in the Sooner State and generate 50,000 high-paying jobs.

According to the World, Tulsa Mayor G.T. Bynum has previously stated that he didn’t want to keep the Amazon proposal a secret. If made public, the application could give other cities a competitive advantage.

The World reported about two dozen applicants, including Boston and Washington, D.C., released their proposals in whole or in part to the media and the public.

What might Tulsa leaders be proposing that they want to keep a secret from other cities or their constituents? Are they proposing to put an Amazon package into the arms of the iconic Golden Driller at the Tulsa County Fairgrounds? Does the application include details on how to lure the Thunder to the BOK Center as its home court? Are they promising to never send a tax bill to Amazon?

What could Tulsa put on the table?