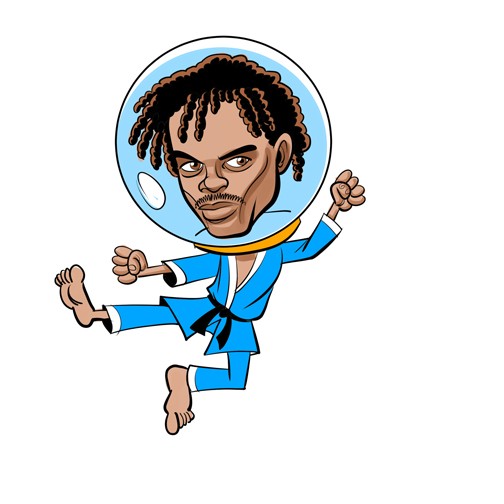 OKC is home to a man from the future who has stolen Chuck Norris’ moves.

Dante Rashad Anderson took his extensive knowledge of what’s to be to two fast food chains to grab some grub.

FoxNews.com reported that he yelled at Carl’s Jr. employees and demanded food.

When that didn’t work, he went across the street to Arby’s, where he jumped over a counter, shoved a manager, grabbed fistfuls of chicken and bacon then ran away, breaking a glass door on his way out.

According to KOCO.com, Anderson claimed he was from four years in the future — 2016 in particular, because that’s how math works — and that’s how people get food, or they would if they all weren’t dead.

“I am from planet Earth 2016 and am four years advanced on you, and you guys are always trying (to) kill me,” Anderson told police. “On my planet Earth, everyone is dead and I walked here from there.”

And here we all are, wasting time in grocery stores and working so we can pay for things when we’re all just going to die soon.

Witnesses said Anderson walked down the street as he ate bacon and kicked automobiles.

“He jumped up like he was Chuck Norris and just kicked the crap out of my car,” Patricia Beedle told Fox 25. “I mean, he kicked it so hard you could just feel the momentum of him kicking it.”

KOCO.com reported that police found Anderson lying on the ground down the street.

“I got bacon and chicken and I scared the lady,” Anderson allegedly told police. “She thought I was going to hurt her, but I was not. I was just hungry and wanted some food. That is what I have to do to get food. I knew I was going to jail for doing this, but no one wants to help me out.”

Anderson was arrested on charges of assault and battery, larceny and destruction of property, and police suspect he was on drugs or having some sort of breakdown.

In any case, if we woke up in the future and had Chuck Norris’ superpowers, we definitely wouldn’t waste them robbing chicken from an Arby’s (king of the slow-cooked roast beef sandwich) or kicking cars.