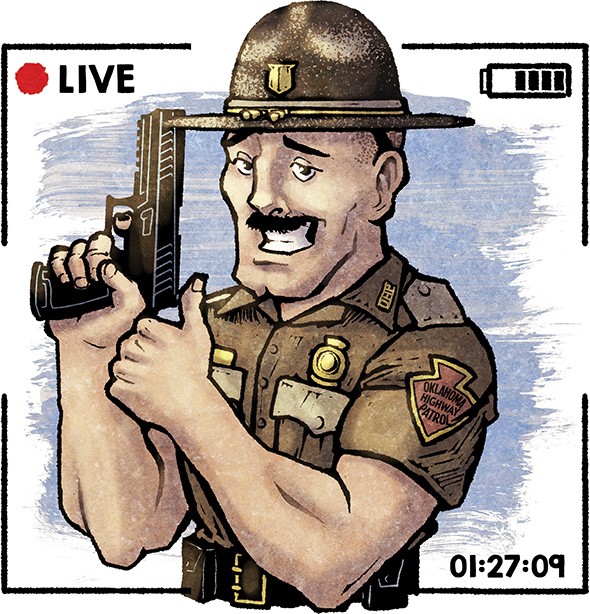 Two years after Tulsa Police Department (TPD) cut ties with a Cops-esque reality show, Oklahoma Highway Patrol is stepping in for its close-up. Oklahoma Department of Public Safety signed an agreement with Big Fish Entertainment that will last through 2020, with an opportunity to extend the deal for a second year.

OHP troopers in Tulsa and Oklahoma City will film with Live PD starting Friday, a move it hopes will be good for recruitment and transparency. The self-described No. 1 show on Friday and Saturday nights, “Live PD viewers get unfettered and unfiltered live access inside a variety of the country’s busiest police forces,” according to A&E’s website.

It was this “unfettered and unfiltered” access that made TPD not want to renew its contract. Chief Chuck Jordan said the department felt it was not in the best interest to continue filming after a clip garnered the department some controversy. He told The Frontier that officers did not like the way it represented Tulsa and the police department. Though, again, it was “unfiltered.”

The controversial clip features breakout star Sgt. Sean “Sticks” Larkin, an admitted “full-time popo” and “part time CrossFitter” who became a fan favorite probably because of his piercing green eyes, young Bill Clinton aesthetic and Thanos-like jaw. In the clip, Sticks racially profiles a black man because he was wearing blue, which he called a “gang color.” Though the clip gained traction on social media and was critiqued by numerous people, Larkin’s charm landed him a recurring guest analyst spot for the show and an A&E show of his own to host, PD Cam. (It is basically the same thing but mainly told through police body, dash and helicopter cameras and surveillance video.)

Mayor G.T. Bynum said he worried that the Live PD crew was “just standing there filming” while officers were in danger.

“I’m not a fan of a TV show that is trying to feed off the difficulties are [sic] police officers face,” he told The Frontier.

TPD was a part of the show’s first season. OHP will appear on season three, and though the Chicken-Fried News staff might join Bynum in not watching, we cannot wait to see which trooper makes it big.