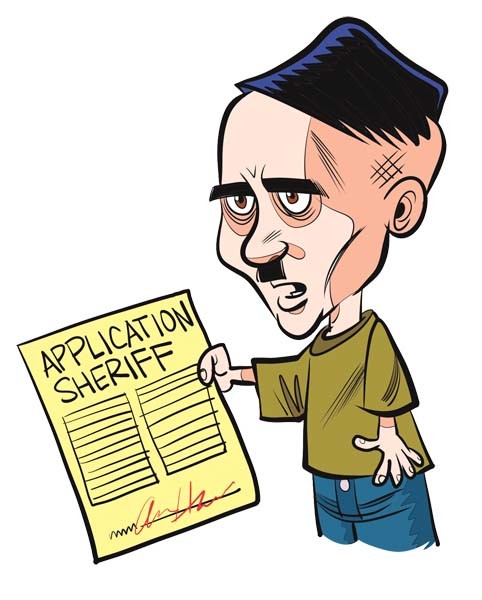 As news junkies, we here at Chicken-Fried News get excited when we see examples of quality journalism. So excuse our joy as we cheer the fine reporting of Texoma’s KXII News 12 and reporter Rachel Knapp, who asked all the right questions in connecting Colbert interim police chief Bart Alsbrook with a Southern Poverty Law Center-identified hate group.

In the aftermath of deadly August protests in Charlottesville, Virginia, the law center (SPLC) released an updated map of white supremacist hate groups in the United States. The map included Texoma’s ISD Records, a music label and merchandise vendor that sells racist messages.

After the map brought the news station’s attention to the site, someone at KXII noticed Alsbrook’s name listed as the site owner — a problematic connection considering he was coincidentally named Colbert interim police chief in the same week.

When asked about the connection, Alsbrook told Knapp his identity had been stolen by skinheads at heavy metal shows in the 1990s. He claimed they have been using his name in connection to many racist activities and groups through the years.

Alsbrook’s explanation seems plausible, if unlikely. Identity theft is a significant problem, after all. Alsbrook later told Tulsa World the allegations of racism have ruined his life.

Though it is possible his identity was stolen at some point, follow-up reporting by SPLC draws an undeniable link between the interim police chief and a personal history with white-supremacist movements and skinhead metal.

The nonprofit, in an Aug. 30 post on its website, cites past photos and video that show Alsbrook, at the least, comes from a checkered past. In one photo, a masked man with identical tattoos to Alsbrook can be seen holding a large assault rifle. In a video, he talks about the encroaching extinction of the white race.

Alsbrook actually offered his resignation to the Colbert city council, but council members voted not to remove him. A city spokesman told KXII the council did not believe Alsbrook had done anything that warranted firing.

As of Oklahoma Gazette’s print deadline, Alsbrook is still Colbert’s acting police chief. Incidentally, remind us not to travel to Colbert anytime soon.