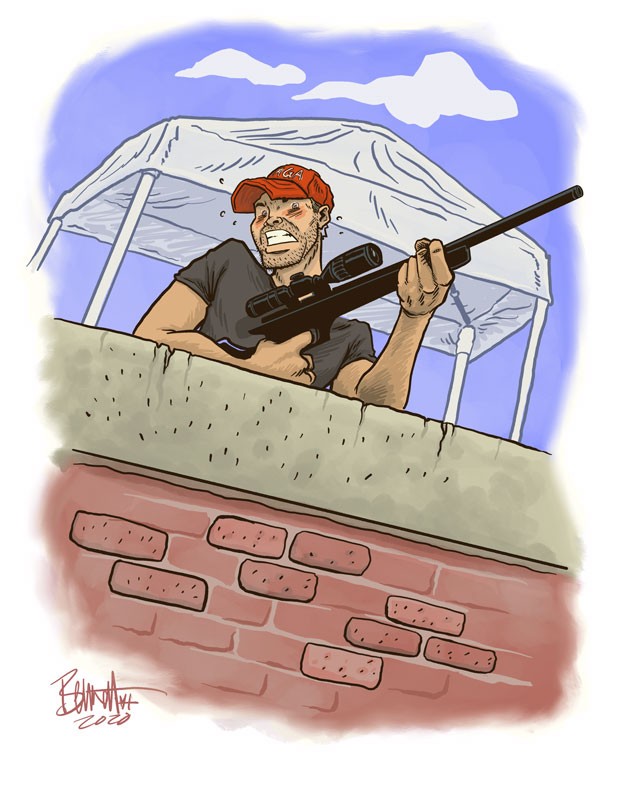 Western Avenue has seen an explosion of growth in recent years, but one advertising agency brought something no other business in the corridor has: rooftop snipers.

A QAnon flag in the window of the new building of advertising firm Alotta Action Advertising, Inc. has apparently brought some unwanted attention, and QAnon enthusiasts strapped on their finest firearms and stood watch over the building during a known peak time for vandals and shit-disturbers: noon on a Saturday.

Social media quickly filled with photos and videos of the gathering, which included a petition signature effort to recall Mayor David Holt and several members of the Oklahoma City Council. Legendary OKC activist and inveterate gadfly to the right wing Mark Faulk donned a surgical mask and went into the belly of the beast. Astonishingly, Faulk was able to infiltrate and interview several members of the crowd during a 40-minute live Facebook video and extract himself undetected.

During Faulk’s video, which could easily be edited into a segment for Sacha Baron Cohen’s Who Is America?, one attendee, wearing his signature boogaloo lad Hawaiian shirt, informs Faulk, who was arrested and has been charged while protesting, that Antifa has sources with District Attorney David Prater’s office and there are no records of such arrests. (Spoiler alert: there are.)

Not only is this not the first time the company has raised eyebrows, it’s not even the first building on the block to make the headlines. A mural by local artist Bob Palmer was painted over on the northern wall of its former location.

“That mural was ugly, and we are going to put a new mural on it … If you have any issues with it, you can contact my landlord ... Otherwise I don’t need to be bothered with this,” owner Jen Hutchings told NonDoc in 2017.

As the proverb goes, “There are three bad neighbors: great rivers, great lords, and great roads.” From where we stand, it’s not Western Avenue that’s a bad neighbor here.