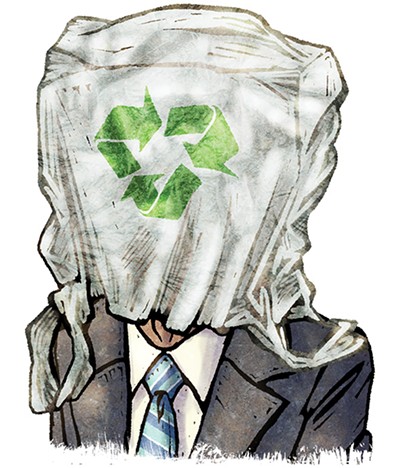 One of 2018’s most popular memes took a screen shot from a bespectacled anime character looking at a butterfly and asking the question, is this a pigeon?

As Norman mayor-elect Breea Clark made the push to tax single-use plastic bags in the city, the Oklahoma Senate is looking at that attempt with the question, is this the Green New Deal?

Senate Bill 1001, proposed by state Sen. James Leewright, R-landfill, sailed through the Senate and is up for consideration in the House. The bill would prohibit cities from banning or taxing containers including plastic bags. Leewright’s argument for a preemptive ordinance against an ordinance is that businesses will not move to Oklahoma due to the lack of litter consistency. Why would a company do business if it is not allowed to use plastic bags in certain areas? Keep in mind that cities all over the country have banned plastic bags outright.

That makes as much sense as the conservative talking points surrounding the Green New Deal alleging that GND bans air travel and outlaws hamburgers. Both of these points are not true because it’s not a piece of legislation and doesn’t actually advocate for the full elimination of those things.

Clark told The Norman Transcript that Leewright’s argument is “insane and completely unreasonable.”

“Tell me one business that’s not going to move here because we don’t have a preemption bill in place. I’ll listen, but I don’t think you’ll find one,” Clark told the Transcript.

Clark said the bill emerged from the carpeted walls of the American Legislative Exchange Council (ALEC), a conservative lobbying firm that treats states like Oklahoma like guinea pigs for its prewritten legislation promoting deregulation like it’s a new Ayn Rand novel.

Under Leewright’s thinking, businesses will be turned off from coming to Oklahoma if they cannot get uniform container rules? Is that seriously more of a deterrent to commerce than turning back the clock to the Wild West with constitutional carry?