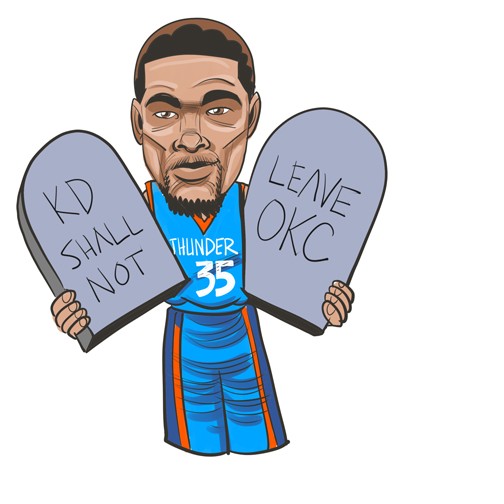 Home is where the hoops are.

It’s no secret that teams across the country covet Oklahoma City Thunder megastar Kevin Durant, especially with his contract ending in July. Everybody wants the guy. He’s like the Kevin Durant of basketball.

But maybe play it a little cooler, other NBA cities. Every time KD plays in New York, Boston, Los Angeles, Portland, Miami — anywhere, everybody asks him, “How do you like our city?”

Have some self-respect, you floozies! No. 35 knows what you’re up to. Don’t throw yourselves at him. You could even play coy, like you’re way more into LeBron or that other basketball player with the hair and the shoes. You know the guy.

Don’t worry, though. Oklahoma City’s inferiority complex was on display at a recent fundraiser for KD’s foundation (held at the baller’s restaurant, Kd’s Southern Cuisine, in Bricktown) when someone asked the titular star what he thinks of OKC.

Make no mistake: Oklahoma City loves Durant. If it puts a statue of him holding the Ten Commandments at the State Capitol, nobody would complain. We hope and pray and throw all our pennies into wishing wells trying to keep him here, but when some other city offers him the moon to win a championship there, he just might take it.