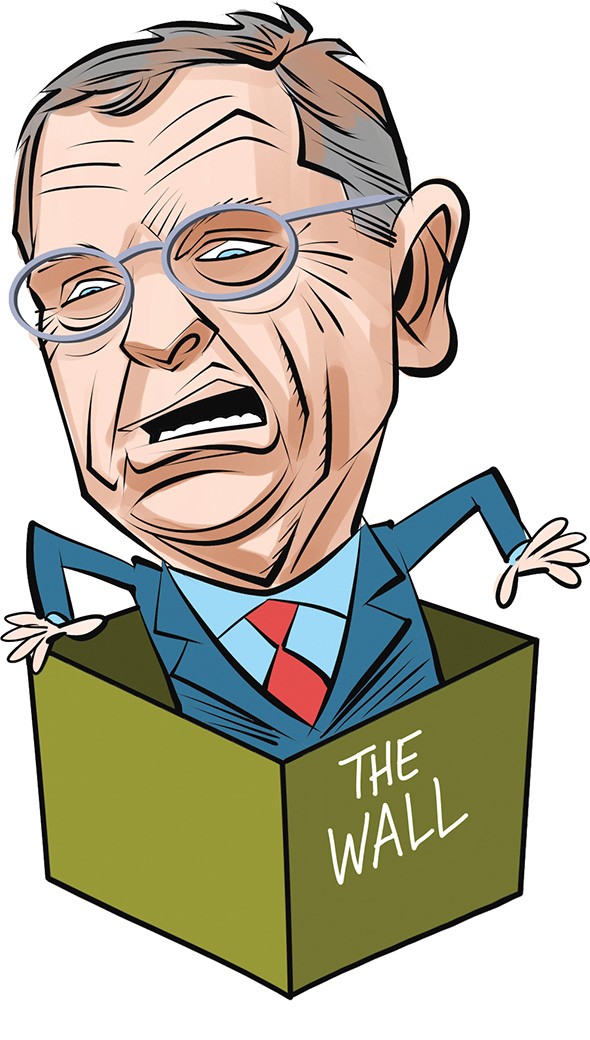 U.S. Sen. Jim Inhofe has spent most of his life on Earth trying to outlive the planet, mostly by advocating anti-environmental, pro-industrial legislation that would hasten its transformation into a gaseous, toxic space pustule. But Inhofe, who at age 83 is still an ankle-biter compared to Chuck Grassley, took a break from doing Dioxin keg stands on the Senate floor Nov. 1 to introduce a completely coherent, not-at-all-googly-eyed, bonkers argument for President Donald Trump’s damned border wall.

In a press conference, Inhofe unveiled a plan that would force illegal immigrants to pay for Trump’s wall by, as Tulsa World reported, “making it more difficult for them and their children to receive benefits such as earned income and child care tax credits,” because illegally immigrated workers are always filing tax returns.

"A lot of the people don’t think it's really necessary to have a wall,” Inhofe told KFOR.com. “They don't think this is as big a deal as I think it is. The president has decided that, in order to really protect our interests in this country, we're going to have to do something that every other country does and that is have a wall.”

OK, so of course that sounds super-dumb, the kind of nationalist squalling you hear from batty uncles who haven’t been taking their fish oil, but there are more walls than most Chicken-Fried News readers might think. For example, Botswana, Ecuador, Brunei, Afghanistan, China, Egypt, Iran and several Balkan states that are trying to keep Russia from invading them all have walls or fences. Come on; if Uzbekistan and Kyrgyzstan can put up a wall, why are we letting all the cool kids have all the fun?

What CFN thinks is happening is that Inhofe is literally trying to turn one of Trump’s lies into a quasi-truth. In his June 2015 campaign announcement speech, Trump said, “[I] would build a great wall, and nobody builds walls better than me, believe me, and I’ll build them very inexpensively, I will build a great, great wall on our Southern border. And I will have Mexico pay for that wall.”

So it’s not so much that he will get Mexico to pay for the wall, but Inhofe wants to ensure that this great edifice will be funded by Latino immigrants who lack sufficient documentation. Sounds like the Internal Revenue Service (IRS) will have no problem with collections, right?

During his speech at Big Elk Energy Systems, Inhofe did indicate that the wall, which will likely cost $25 billion, would only be built in urban areas. So … San Diego and Tijuana? El Paso and Juarez? Del Rio and Ciudad Acuna? McAllen and Reynosa? Yes, Senator Inhofe, CFN understands that all the coyotes tend to travel through heavily populated and policed areas when transporting people across the border and never through the sparsely populated desert areas of the American Southwest. No, that never, ever happens.