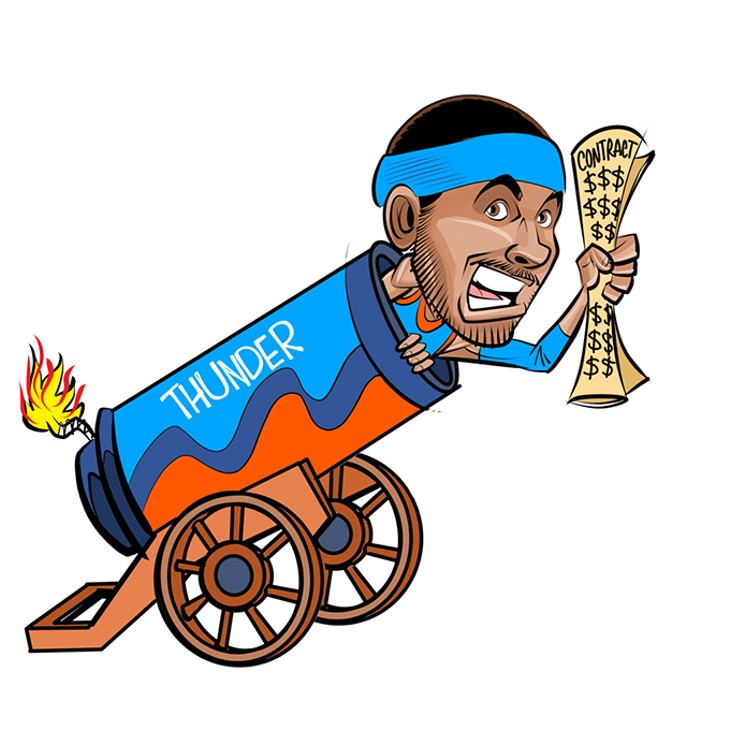 Although it was only a select few in attendance for the July 1 party where Paul George announced that he was returning to Oklahoma City Thunder, most of the city might’ve said they were there to see George and Russell Westbrook smoke cigars and watch Nas perform.

Gamble Thunder general manager Sam Presti’s trade for George from the Indiana Pacers paid off. With no guarantees that George would re-sign after last season and the emergence of traded pieces Victor Oladipo (who was named the NBA’s most improved player) and Domantas Sabonis, it’s a rare case in which both teams are happy with a trade.

Of course, it feels somewhat like basketball purgatory because of the dominance of the Golden State Warriors, but it’s better than the alternative. Had George left, the Thunder would’ve had no money to spend on outside free agents and it would’ve lead to a season of “Should they trade Russell Westbrook?” headlines from the national media and possibly even people wondering about the future of the franchise in the city. George’s four-year, $137 million deal (with a player option after year three) guarantees the Thunder will be in the national spotlight into the next decade.

With the re-signing of George, Jerami Grant and Raymond Felton and bringing in former top-10 selection Nerlens Noel on a minimum contract, the Thunder is left with the highest payroll in league history, factoring in Carmelo Anthony opting into a $27.9 million deal for next season. The Thunder’s projected payroll is $300 million because of the league’s luxury tax. Owner Clay Bennett is spending money like oil is still $100 a barrel. It’s ironic for a franchise that used dodging the tax as reason for trading future-MVP James Harden following an NBA Finals appearance.

The team will save  $108 million in tax by using its stretch provision on Anthony this season, which would allow the team to space out contract payments and potentially allow Anthony to join the Houston Rockets and be on the way to re-uniting with Chris Paul on the famous Banana Boat Team from 2015. Given Anthony’s reluctance to come off the bench, where his scoring ability would provide a boost and hide his defensive shortcomings, jettisoning Anthony makes financial and basketball sense.