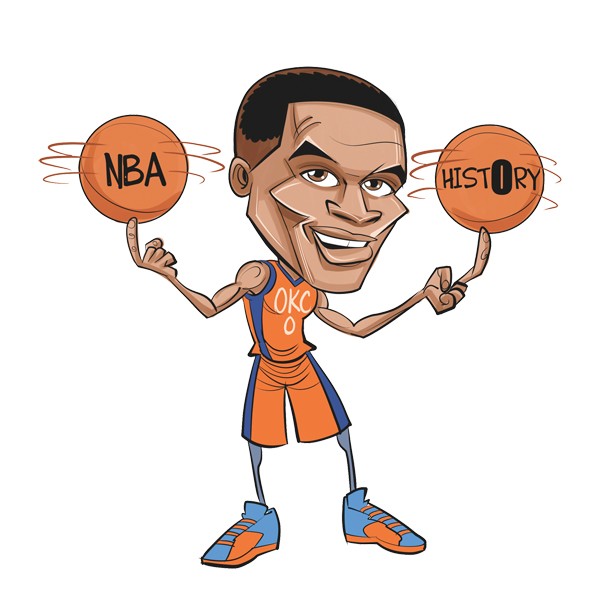 Russell Westbrook’s campaign for Most Valuable Player rolled through the final stretch of the Oklahoma City Thunder’s regular season much like a powerful locomotive pushing through the night air, as seemingly unstoppable as a meteor streaking through space on a collision course with destiny or, heck, a Westbrook drive to the basket between dumbfounded defenders.

His final statement games were not only heroic; they were historic.

Take his March 28 game against Orlando as an example. Westbrook amassed 57 points to match 13 rebounds and 11 assists in the highest scoring triple-double the National Basketball Association (NBA) has ever seen. Three of his points came on a wild 31-foot shot with seven seconds left to force overtime and led to an eventual Thunder win.

If that was not impressive enough, how about Westbrook’s performance during the April 9 game on the road against the Denver Nuggets? The Thunder was behind by double digits when the point guard recorded his 10th assist and clinched his 42nd triple-double of the season, passing the legendary Oscar Robertson for most triple-doubles in a single season.

The record was nice, but Westbrook, of course, wanted the win. A nearly unbelievable 36-foot three-point shot as time expired put the Thunder up for good. The shot brought his total to 50 points on the night, making it his record third 50-point triple-double in a season. It also mathematically eliminated the Nuggets from playoff participation.

Most experts agree that the race between Westbrook and Houston’s equally matched James Harden for NBA MVP is the tightest competition for the award in many years. Fans are digging into the most obscure analytics to find a way to distinguish the two impressive resumes. The race has jocks cracking open the nearest Merriam-Webster dictionary to debate semantics of the word “valuable.”

Though MVP is a regular season award, the opening round playoff series between Oklahoma City and Houston will impact the national narrative. The league is scheduled to announce the award winner during a live awards show June 26.

We at Chicken-Fried News leave you with words from Robertson himself, who congratulated Westbrook on breaking his record before the Thunder’s last regular season home game April 12: “I just have one more thing to say,” the former player proclaimed over the arena intercom, “MVP!”