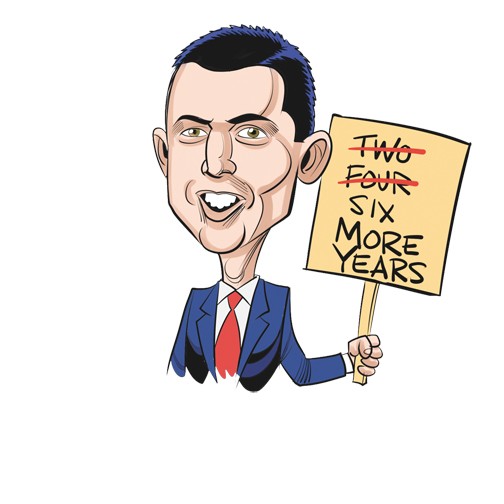 Almost five years ago, Westville’s Markwayne Mullin, a candidate for Congress, told The Associated Press he planned to serve no more than three terms if elected.

Sen. Tom Coburn, who previously represented Oklahoma’s 2nd congressional district, cheered. Like Mullin, he took that same pledge and served no more than three terms in the U.S. House. Later, Coburn served as a U.S. Senator.

Now, Congressman Mullin, a Republican serving his second term representing the state’s 2nd District, says he’s open to a third and fourth term. He and wife Christie Mullin will “seek the Lord’s guidance” on the notion of a fourth term, according to Tulsa World.

Asking God about serving more than six years in Washington, D.C., was not the answer Coburn wanted. After all, a pledge is a pledge.

In late May, Coburn announced his support for the other guy in the Republican primary.

“I am proud to endorse Jarrin Jackson, a combat veteran who understands and has fought for our Constitution,” Coburn said in a statement published in Tulsa World. “He will stand up for us in Washington and not go along to get along. He also will honor a six-year, self-imposed term limit.”

Mullin was burned by Coburn, but U.S. Sens. Jim Inhofe and James Lankford stepped up with a glass of cold water. Both endorsed Mullin.

“Markwayne is unique in Congress, a businessman who has created jobs and knows how to run a successful company,” Lankford said in a written statement released by Mullin’s campaign. “He’s a relentless fighter against government regulations, higher taxes and the unconstitutional executive orders that threaten our freedom.”

At Chicken-Fried News, we recommend Mullin’s camp not concentrate so much on a Dr. No endorsement. The former lawmaker was the only member of Congress to endorse perennial candidate Alan Keyes for president in 2000. Earlier this year, Coburn picked U.S. Sen. Marco Rubio for prez.

Given Coburn’s track record on endorsements, Mullin might be better off.