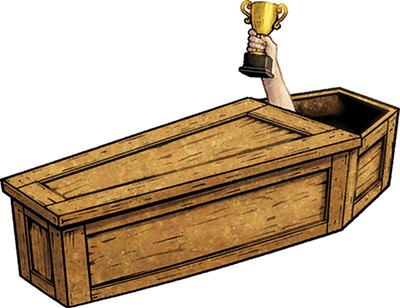 To most introverts, spending 30 hours alone with no connection to the outside world might sound like a dream come true — especially if you get paid $600 once it’s all said and done. But what if you had to do that in a “slightly used,” claustrophobic Frontier City coffin? We’re not sure what “slightly used” means in this case, but that’s definitely a deal-breaker for us.

Unlike having to wait for hours stranded on Frontier City’s Silver Bullet, one of its most well-known attractions with a tendency to stop mid-ride, this confinement is completely voluntary. The amusement park is actually accepting applications — yes, applications — for its 30-Hour Coffin Challenge during its annual Fright Fest.

“Six coffin dwellers will be chosen to spend up to 30 hours in a coffin, from 1 p.m. on Saturday, October 5 until 7 p.m. on Sunday, October 6,” according to Frontier City’s website. “Anyone who gets out of their coffin for any reason, with the exception of getting out to participate in the challenges or for the designated bathroom breaks, will be out of the contest.”

Participants will receive meals “in bed,” designated bathroom breaks, “terrifying visits by the Fright Fest freaks” and take part in challenges to stay in the contest. We’re not sure what those challenges will be, but various media outlets in other states report their local Six Flags amusement parks incorporating a wheel with challenges like eating dried crickets, holding a snake and being blindfolded. Some other Six Flag parks also mention a tie-breaker in case more than one person makes it through the 30 hours: a race to eat “VERY hot chicken wings with a minimum Scoville rating of 1 million,” which is about the same as ghost peppers.

Ultimately, one coffin-dweller will win the $600 cash prize, two gold combo season passes and a Fright Fest package because surely they’ll want to spend even more time at the amusement park.