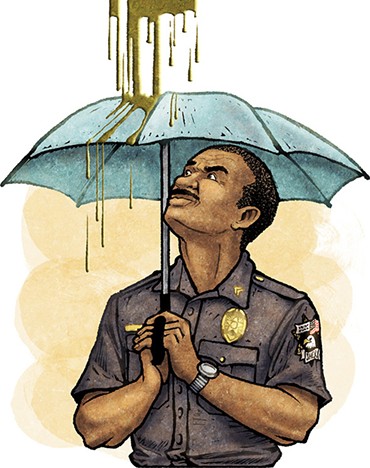 “Gassing,” according to Double-Tongued Dictionary, is prison slang for “throwing feces or bodily fluids at someone.” In a video Oklahoma County Sheriff’s Office public information director Mark Myers posted to his personal Twitter page on Dec. 6, sheriff’s office employees seem to be getting a similar treatment from the plumbing in the Oklahoma County jail.

“It’s just gross and unhealthy for employees to walk into this place and have to work while inmate waste runs like a river,” commented Myers on a video of water dripping from the ceiling, collecting in strategically placed waste baskets and running in rivulets on the floor. “How could any elected official not approve for the Sheriff’s Office to relocate to the Krowse Building? I challenge them to work in this jail. Everyday I go home and feel like I must decontaminate, at the very least remove my shoes so that I don’t bring in microscopic funk into my house.”

The office was originally scheduled to relocate and turn operations over to Oklahoma County Criminal Justice Authority Jail Trust on Jan. 1, but Sheriff P.D. Taylor announced last week he was willing to grant a 106-day extension of the deadline to April 15 while the Jail Transition Committee determines what the move will require. Jail trustee and county commissioner Kevin Calvey, meanwhile, told News 4 that the sheriff’s deadline is not binding and Taylor is required by state law “to operate the jail until such time as the trust is ready.”

In a statement issued by the sheriff’s office on Dec. 10, Taylor touted the benefits of the transition.

“With law enforcement moving from the jail, the Trust will have valuable office space they need to operate inside the jail at minimal to no cost to their budget,” Taylor said.

The Trust might want to find room in the budget for rain boots, but according to a 2017 report by Oklahoma Policy Institute, “little if any new revenue can be raised from new fees in the criminal justice system” because “jail inmates typically make less than half the income of their peers even before their arrest” and are often unable to pay, leading to  a “cycle of incarceration and poverty” that actually increases costs by increasing the number of inmates, all of whom presumably use the toilet. That’s just basic trickle-down economics.