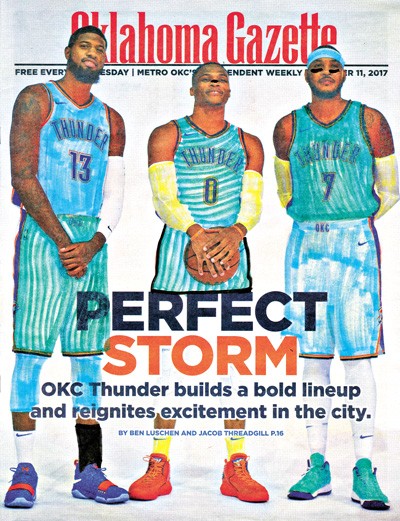 Oklahoma Gazette’s Oct. 11 cover story, “Perfect storm,” beautifully covered the lightning-fast turnaround in the Oklahoma City Thunder’s fortunes with the addition of Carmelo Anthony and Paul George to the starting lineup. But never mind on-the-court talent in the post-KD era; these guys need a makeover.

Well, not Russell Westbrook — in a perfect world, Russ would be setting mandatory dress codes for the entire nation, from Wall Street to Rodeo Drive. In a Russ world, clergy would rock orange Louis Vuitton bomber jackets and Dover Street Market tops while grandfathers show off their Alexander Wangs on mall walks.

But while the Thunder recently unveiled a knock-your-Nike-socks-off alternative uniform, a Gazette reader taking a break between sweaty spin classes at Midtown YMCA used the “Perfect storm” cover as an opportunity to give the standard uniform some new flavor.

Armed with what appeared to be four markers, the budding Vivienne Westwood or Jason Wu marked up the cover to give Westbrook, Anthony and George a striking aquamarine and sky-blue ensemble with bold vertical striping. George received one black sock — business on the left, party on the right.

We at Chicken-Fried News instituted Fashion Forward Fridays once the new editor came on board because he hates casual wear and pushed us to don tri-corner hemp hats and Muppet-skin Capri pants instead of our usual Dockers and Under Armour golf shirts. So if a lovingly defaced Gazette cover can help the Thunder score a field goal from beyond the three-point line on the court of couture, CFN will shed tears when the entire team is flown to 2018 Fashion Week in Milan.