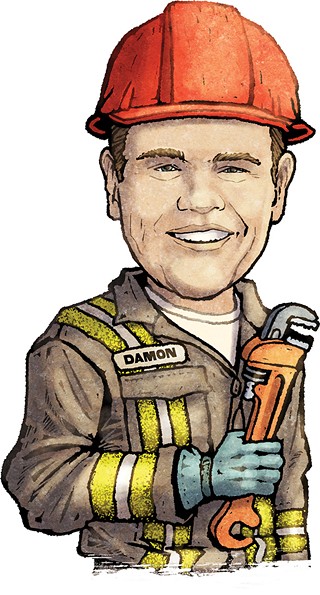 In June, sightings of actor Matt Damon (EuroTrip, Mystic Pizza) temporarily exceeded sightings of Bigfoot in Oklahoma, and for good reason: Damon is apparently filming a movie here. According to Variety, Stillwater, written and directed by Oscar winner Tom McCarthy, will star Damon as an “American oil-rig rough neck from Oklahoma … who travels to Marseille to visit his estranged daughter who is in prison for a murder she claims she did not commit” and is “confronted with language barriers, cultural differences and a complicated legal system.”

We are not sure what navigating a confounding and confusing justice system will entail for Damon and daughter, but let us offer a couple of pitches based on actual Oklahoma justice. How about, much like 48-year-old Corey Atchison, Damon’s daughter is found guilty of murder then spends 28 years in prison before a Tulsa County district judge determines that a key prosecution witness was coerced into giving false testimony, but then, in a feel-good Hollywood ending, discovers she might be eligible for up to $6,250 for each year of her life spent behind bars? “Too feel-good,” you say? Then how about, much like Tondalao Hall, Damon’s daughter is sentenced to 30 years in prison under a failure-to-protect law because she was unable to prevent her abusive husband from severely injuring their 3-year-old daughter, but — get this — in an M. Night Shyamalan-esque twist, her abusive husband gets off with probation?

Oops. A quick Bing search shows that the film’s setting, Marseille, is actually located in France. Far be it from us to tell Hollywood how to Hollywood, but it sure seems like if they want a truly high-stakes legal nail-biter, they should set it in Oklahoma and cast people of color. Just do not expect a happy ending.