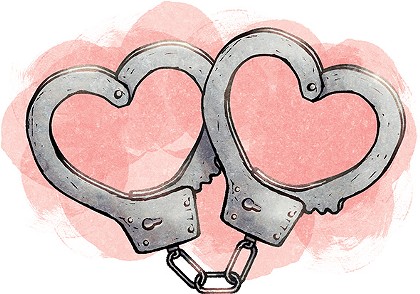 It is a tale as old as time, star-crossed lovers destined for tragedy, but this time with a twist that seems inspired by Orange Is the New Black. KFOR recently reported that a 20-year-old female detention officer was caught sending love letters to a 23-year-old male inmate at the Oklahoma County jail. If you are wondering, female officers are allowed on male floors because not only is the jail overcrowded, unsafe and poorly constructed, but it is also heavily understaffed — well, except for Immigration and Customs Enforcement agents who are always present on weekdays.

Anyway, the jailhouse sweethearts started cracking on when officer Sharidan Wilson gave inmate Darryl Frost a cell phone. They began talking several times throughout all hours of the day, even while Wilson was on duty. One of Wilson’s co-workers noticed how close they were getting and reported it to supervisors before finding Wilson’s love letter to Frost.

“Just know you’re all I think about and I’m ready for you to be out of there so we can actually try something real,” Wilson wrote. “I want to talk to you as much as I can.”

But in between daydreaming of her inmate admirer, she was also thinking about the consequences because she went on to write, “If they find out it’s me you are calling, not only will I lose my job but I’ll get locked up too.”

Frost was in prison facing a charge for attempted robbery with a dangerous weapon but is now facing two additional charges for conspiracy to bring contraband into the facility and for possession of said contraband. Wilson faces the latter two charges as well and a third charge for a violation of the Oklahoma Computer Crimes Act. KFOR also reported there are recorded conversations between the two but they are not being released due to ongoing investigation.

Wilson was fired the same day the note was found, after less than seven months on the job. According to KFOR, deputies said she spent her last two weeks “professing her love to a man she was supposed to be monitoring.” Though to be fair, she was definitely still monitoring him, just very, very unprofessionally.