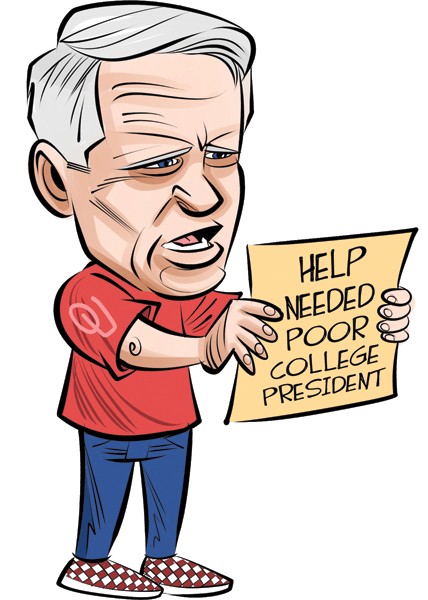 Jim Gallogly recently snubbed University of Oklahoma (OU) administrators for being in the red and owing a whopping $1 billion in debt.

“Our debt has more than doubled in the last 10 years, as we’ve been on a building campaign,” Gallogly said at an OU Board of Regents meeting over the summer.

While Gallogly’s comments conveyed an intention to create a healthier financial climate for the university, one couldn’t help but feel the subtle notion of finger-pointing.

Former OU president David Boren said that while the debt seems high, the sum is similar to what other high-ranking universities owe. He said that since Oklahoma’s Legislature began reducing state funding for universities and colleges across the state, OU’s debt has grown substantially.

“There is no doubt that the strengths of our educational system cannot be maintained unless our elected officials begin to reinvest in it,” Boren said in a public statement. “We all need to help my successor at OU obtain the necessary public support to build a strong future.”

A 2017 study revealed that Oklahoma ranks last in state funding for higher education and close to last in state funding for grades K-12, which would explain a whole heck of a lot that has transpired in the Sooner State as of late. (Hello, teacher walkouts, emergency teaching certificates, the disappearance of art and music classes, university staff layoffs and consistent annual tuition spikes.)

One thing is certain: OU has come out of the closet and we can see her now in all her glory, stripped down and dressed in nothing but the most expensive crimson and crème.

If you’re going to get through this life carrying educational debt, the millennial ladies at Chicken-Fried News know all too well what that’s like and have a few tips to help you get by.

First, consider moving back in with your parents. It’s honestly not that bad; you save money by not having to pay for rent each month, and having the same curfew you did when you were 16 actually helps you get the eight hours of sleep you need to get through your 9-5.

Don’t think about sneaking out of mom and dad’s to see that boyfriend of yours either, OU. Moms of the underemployed are usually more than glad to see a boyfriend stay the night so long as he doesn’t mind staying for breakfast in the morning and sitting through some questions from Dad about when he’s going to put a ring on it.

Speaking of tying the knot, aim high! Unfortunately, you can no longer afford to date the guys with the liberal arts degrees. You need to do your fair share of schmoozing around those oil and gas guys. Don’t be afraid to show some leg, either!

Be safe with that boyfriend of yours, though. You will likely not be able to afford kids, which is OK because while kids are cute, having them is so 1991.

Lastly, stock up on ramen. We know you’ve seen the stuff around campus and while you used to feel bad for the poor students who had to eat it constantly, when your belly aches at night because you can no longer afford the good stuff from Whole Foods Market, a cup of ramen is just what you’ll need.

If you need a buddy who knows what it’s like to have to borrow, just look around campus! There are over 30,000 trendy millennial students who would happily welcome you to the nickel-and-dime community.