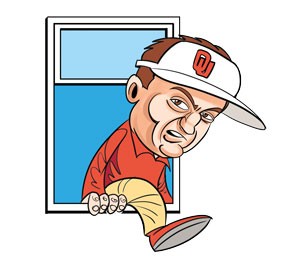 The best offense is a good defense. And the best way to avoid being arrested for an offense is to get the hell out of there — at least according to University of Oklahoma head coach Bob Stoops.

“If some girl starts hitting you, you better not touch her. Jump your ass out the window and don’t stop running.”

Those wise words were attributed to @OU_CoachStoops by Tennessee Titans center (and former OU player) Gabe Ikard, who said it was some of the best advice he had ever received.

No strangers to big hits on the field, both Ikard and current OU offensive lineman Tyrus Thompson said it was a message Stoops delivered regularly. After OU running back Joe Mixon’s 2014 suspension for allegedly punching a woman in the face and a seeming epidemic of domestic abuse plaguing the NFL, it’s good to know someone with authority is passing that lesson on to players.

Just make sure you’re on the first floor.

Anyone who self-defenestrates from too high up might have trouble with the “don’t stop running” part of those instructions.