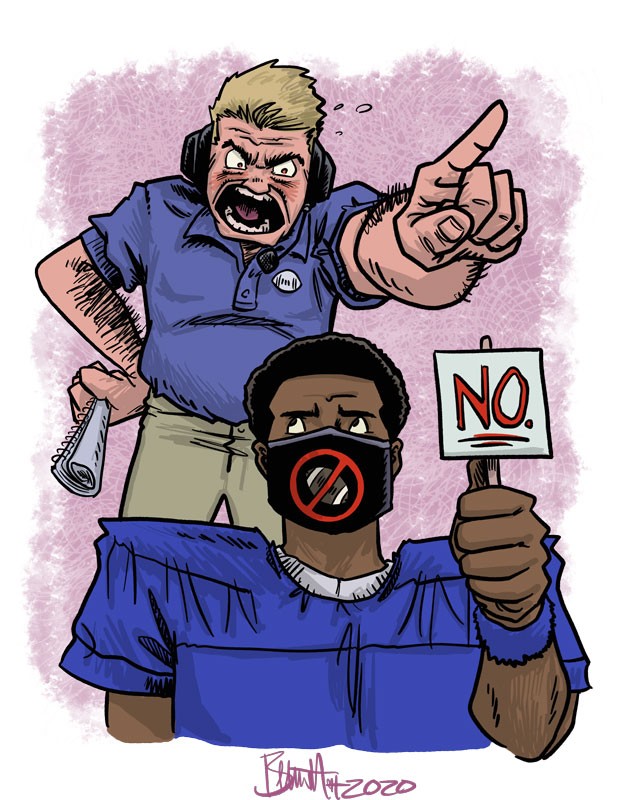 The Oklahoma City and Putnam City public school districts announced that both would be suspending extracurricular programs due to heightened spread of COVID-19 infections, and, as has come to be expected in 2020, the adults lost their minds.
Predictably, social media and local news immediately exploded with the typical choruses of, “Get them back to normal!” In 2020, there is no normal, and trying to pretend like there is the most childish position imaginable. But then again, it’s not usually the under-30 crowd that’s being caught on camera throwing fits about wearing masks inside places like Costco or grocery stores, is it? So we’re treated with the mournful pleas of adults, who are supposed to be in the business of protecting and ensuring the safety of the youth, about the potential costs of missing out on student activities. One high school football coach pointed out that kids rely on their extracurricular activities to get college scholarships, like review boards are going to forget that the entire world went through a pandemic when they approve their applicants next year. Another coach went so far as to say that football saved his life. That may be so, but according to a June study published by the Journal of the American Medical Association — Cardiology, 78 percent of patients experienced some sort of residual heart issues, while a September study from the same journal found that 15 percent of competitive athletes suffered from myocarditis after recovering from COVID-19. Myocarditis is the cause of between 5 to 25 percent of competitive athletes suffering sudden cardiac death, according to Oxford University. The youth of today are constantly underestimated and insulted by the preceding generations, and while maybe it’s too optimistic, if you asked high school football players and marching band members if they’d be willing to sit out a season if it meant a dozen of their classmates’ grandparents might live another year, our money says at least eight out of ten of them would be willing to save Christmas and, if you pointed out to the holdouts that by doing so they’d greatly reduce their own risk of possibly collapsing and dying mid-play sometime in the not-so-distant future, the number of players who’d bench themselves would nearly reach 100 percent.