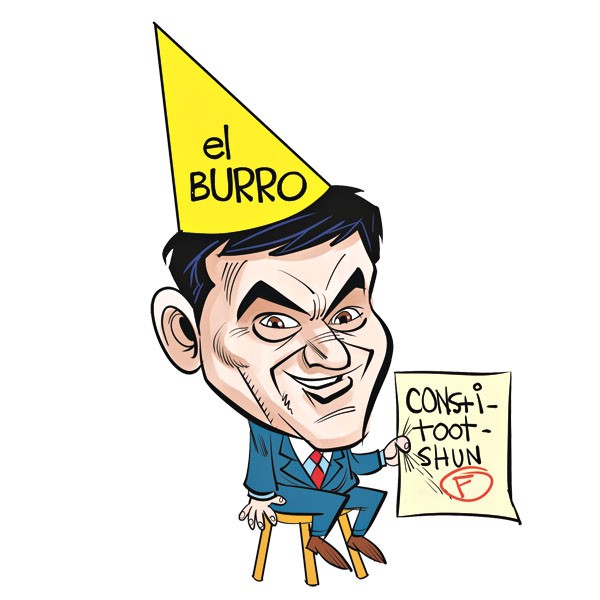 Anybody wondering why the Republican-dominated Oklahoma Legislature couldn’t seem to put together a plan to pull the state out of an $878 million budget shortfall got their answer May 10 when the so-called House Republican Platform Caucus put forth its budget savings plan.

The 22-member group told News 9 it found $1 billion in savings and new revenue to plug the hole and provide teachers a raise. Hurray!

Here are a few of the caucus’ ideas:

>> Eliminate all nonessential, non-instructional employees in higher education for a savings of $328 million. (We at Chicken-Fried News want to know if football coaches are considered essential.)

>> End the Oklahoma Film & Music Office’s annual rebate program to save $5 million. (Of course, that ignores the fact the rebate program ensures money is spent in the state and employs locals. In 2013, the office estimated $3 in revenue for the state for every $1 in rebates given.)

>> Stop spending state money on “promotional swag” and save an estimated $39 million. (That might be OK.)

>> And, to totally bury the lead on this story, Rep. Mike Ritze, R-Tulsa, told News 9 the state could save a whopping $60 million by rounding up all non-English-speaking children in Oklahoma and sending them to federal Immigration and Customs Enforcement (ICE). (We have to ask, Is that too heavy a price for selling our state’s soul?)

“Identify them and then turn them over to ICE to see if they truly are citizens, and do we really have to educate non-citizens?” Ritze vociferated.

Um, Mr. Ritze, the answer to that is yes, actually. In Plyler v. Doe, the United States Supreme Court decided states can’t deny students a free public education because of their immigration status. And, heck, it has never been against the law for any child to be an English-as-a-second-language (ESL) student.

The idea of trying to deport students should “alarm and outrage all Oklahomans of conscience,” said American Civil Liberties Union of Oklahoma director Ryan Kiesel in a media release. “Threatening 82,000 children with arrest and internment that would turn their entire lives upside down is disgustingly inhumane.”

After Ritze’s comments made news, the House Republican Platform Caucus issued a statement May 12 disowning the lawmaker’s threats to Oklahoma children.

“It is disappointing that the press would take the public comments of a single member and apply them to the entire caucus,” the release also said.

Despite the fact that, at press time, the full membership roster of said caucus has not been publicly released.