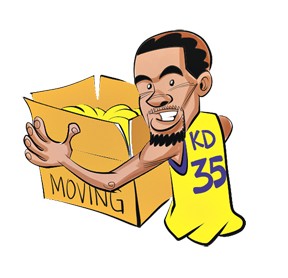 Oklahoma City has no chill, and it’s not about the blazing summer sun.

The hew and cry on social media was dramatic, overwrought and reminiscent of a teenager who got dumped a week before the prom.

“I feel like everything Durant is saying is a lie. This is the worst, most public break up I’ve ever had. No wonder T Swift writes songs,” tweeted Christina Chicoraske.

Some took to Yelp to trash KD’s Southern Cuisine with bad reviews. Some burned their No. 35 jerseys. Some sadists documented how sad their small children were when they heard the news.

But nobody took it quite so far as Bricktown Pink Parrot Cantina manager Rich Taylor, who posted a video of himself berating the superstar in front of Durant’s empty Deep Deuce home.

“Today was a sad day for the city,” Taylor said. “We’ve loved and appreciated this athlete like no other.”

It was a standard break-up tirade accusing the basketball player of lacking both heart and balls.

In a classic break-up move, Taylor pivoted to make it sound like Oklahoma City was getting rid of Durant by saying, “The one thing we couldn’t give you is a heart ... so you’re gone, KD.”

With that, the bar owner left some Durant jerseys on the home’s porch and a “For Sale By Coward” sign stuck in the lawn.

Maybe instead of leaving emo posts all over social media and driving by his house and restaurant like love-sick morons, we can do this like the adults of other “big league” cities and pour a giant glass of wine, turn on a film and change our Facebook relationship status to single.