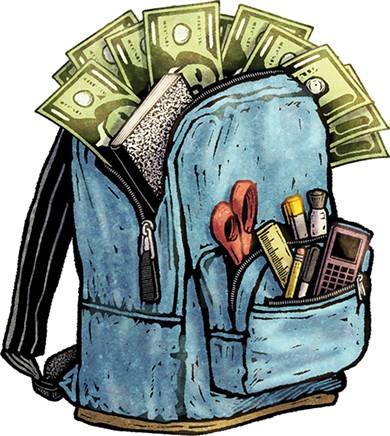 Despite the many controversies surrounding Epic Charter Schools, its advertising campaign, like a runaway train, continues full steam ahead.

Tulsa World reported that Epic spent $2.5 million for an advertising campaign that covers television, radio and online ads. It also pays to sponsor play areas inside two malls, adding up to $105,000 in annual costs. That’s totally normal and appropriate for a virtual school under several investigations, right?

Oklahoma State Bureau of Investigation is looking into claims of embezzlement, “ghost student” enrollment, racketeering and forgery. Teachers have also come forward saying they were encouraged to withdraw low-performing students to boost overall school performance. Two of those teachers are now suing for wrongful termination for, you know, not being shitty people. Epic’s response? Not exactly classy.

“These are disgruntled former employees hoping to profit from what they perceive to be the issue of the day," a spokeswoman said in a statement, as reported by The Oklahoman.

Honestly, there’s so much blatantly unethical — if not completely illegal — stuff going on with Epic that it’s difficult to keep track of it all. But school leaders maintain that Epic has done nothing wrong and said they hope the truth comes out soon. We’re confident the entire state is ready for the truth to set us free from the endless “I’m so glad we chose Epic” ads.

The state is probably also ready for the $112.9 million in state aid funding Epic received in fiscal year 2019 to be put to better use than ads.